Palm Pre to Launch in Canada on Bell Mobility

It looks like the next “iPhone killer” is coming to Canada. Yesterday, Palm announced that they have partnered with Bell to debut their new Pre in Canada. They didn’t specify a date, but said it would be coming in the second half of 2009. 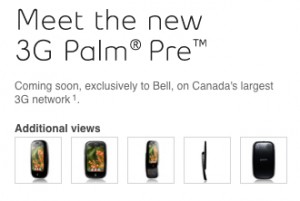 My guess is that the Pre will be available in stores come July/August, in the heart of summer to compete with the rumored next-gen iPhone. We know that Bell has been working on their GSM networks, so that means when the Pre comes in a GSM format it will be supported as well.

Can the Palm Pre Bring Real Competition to the iPhone?

The Palm Pre has been over-hyped in my mind. Everyone is saying it’s the next “iPhone-killer” with it’s combination of a touchscreen and physical keyboard. Doesn’t this sound all too familiar though? Don’t you guys remember the Blackberry Storm? That turned out to be the ultimate dud! Don’t forget the Samsung Instinct and HTC Touch Diamond (yuck) too!

However, Palm has actually put some real effort into the Pre and it does look promising (heck, the majority of its team came over from Apple). But, until the phone is released into the real world I’m going to hold judgment.

Want the Palm Pre? Looks like You’ll Have to Switch to Bell…

As for Canadians pouncing on this, it looks like you’ll have to switch to Bell if you’re not an existing customer. That means it could be costly as most people on Rogers/Fido are on contracts, and canceling will cost you your newborn baby. It’ll also mean you will have to stay with Bell and CDMA. Enjoy traveling with your Pre! 🙂

It also means that you’ll most likely have to sign a 3 year contract with Bell, and expect to pay a subsidized price around the cost of an iPhone, $199. If it’s more than this, I don’t expect the Pre to outsell the iPhone. It might build a nice little niche market and regain previous users, but it won’t make a huge dent in smartphone sales.

Also, there have been reports that Palm may limit the supply units of the Pre to sell out and build up some hype. Are you guys for real? If people looking for the latest smartphones can’t buy the Pre, they’re going to buy an iPhone (or even possibly…a Blackberry) or the next thing in stock. People don’t like to wait.

Why the Palm Pre Will Benefit iPhone Users

What I love about the launch of the Pre is this: competition. It’s been a long time coming that a new smartphone has built up enough real buzz to get Apple’s attention. With 3.0 firmware coming around the corner, I’m looking forward to that rather than the Pre, to be honest. Get ready to read tonnes of never ending Pre vs iPhone debates this summer!

Palm is rumored to launch the Pre the day before the WWDC 2009 conference. We should know by now to never count out Apple. If the next-gen iPhone is launched after that, say good bye to the Pre. With the combination of new iPhone hardware, OS 3.0, and the formidable App Store (which just surpassed 1 billion app downloads), the Pre doesn’t stand a chance.

Are you going to switch from the iPhone to Pre? Will the Pre survive?