The U.S. Patent and Trademark Office (USPTO) has today granted Apple a new patent titled “Digital camera with light splitter”, that details a miniaturized advanced iPhone camera system which employs a light-splitting cube to parse incoming rays into three colour components, each of which are captured by separate sensors (via AppleInsider). The light splitting systems do not require color channel processing, thereby maximizing pixel array resolution. 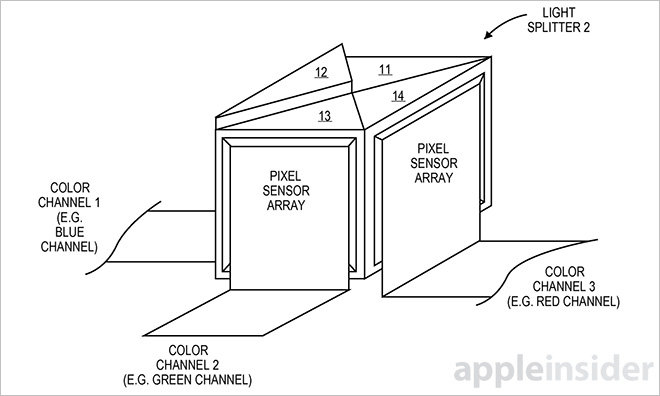 The patent also examines the possibilities of embedding the three-sensor prism-based camera module within the chassis of a thin wireless device like an iPhone. The three sensor imaging technology is commonly found in prosumer video cameras and more recently, has also come to handheld camcorder models. Apple’s design uses light splitting techniques similar to those applied in current optics packages marketed by Canon, Panasonic, Philips and other big-name camera manufacturers.

For its splitter assembly, Apple uses a cube arrangement constructed using four identical polyhedrons that meet at dichroic interfaces. Adjusting dichroic filters allows Apple to parse out red, green and blue wavelengths and send them off to three sensors positioned around the cube. Aside from RGB, the patent also allows for other color sets like cyan, yellow, green and magenta (CYGM) and red, green, blue and emerald (RGBE), among others.

Light splitters also enable other desirable effects like sum and difference polarization, which achieves the same results as polarization imaging without filtering out incident light. The process can be taken a step further to enhance image data for feature extraction, useful in computer vision applications.

With the iPhone 6 Plus, Apple introduced the OIS system, that produces sharp images even in low-light situations, for the first time so, it won’t be wrong to assume that the new camera technology might find its way into the iPhone 6s / 6s Plus devices later this year.

Any shred of mystery Google was saving for its Pixel 7 series launch event on Thursday, October 6, likely dissipated when a detailed and legit-looking spec sheet for the two phones leaked online over the weekend (via 9to5Google). Apparently, a mobile carrier in Taiwan prematurely shared the spec sheet for Google's Pixel 7 and Pixel...
Nehal Malik
34 mins ago