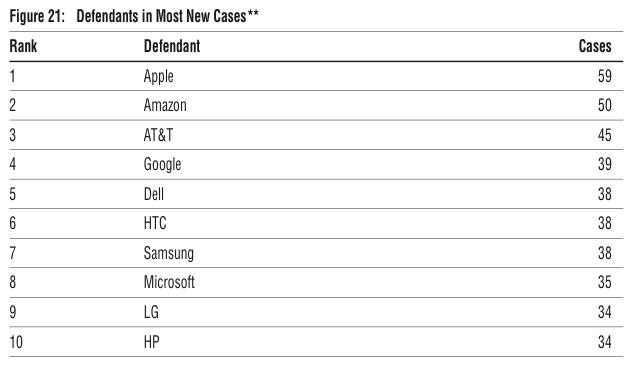 In an interesting article at Fortune, Philip Elmer-DeWitt has highlighted how 2013 was a record year for patent trolls, especially for Apple. Not only was Apple the No. 1 target of patent lawsuits during the year, it was also the top defendant in most new cases filed against technology companies. Here are some of the most interesting facts Philip has extracted from Lex Machina’s 2013 Patent Litigation Year in Review:

While Monsanto won the largest award ($1 billion) from Dupont in a patents infringement case, Apple was No. 2, winning $890 million (excluding costs, fees and post-judgment interest) from Samsung.

In the most recent patent trial with Samsung, Apple claimed that 10 of the Korean manufacturer’s devices infringe on at least five of its patents. While the jury awarded only a fraction of Apple’s $2 billion damages claim — $124 million earlier this month, Samsung is already set to appeal and ask the trial judge to reduce the damages awarded to zero.