According to a new patent application published today by the U.S. Patent & Trademark Office titled “Device Input Modes With Corresponding User Interfaces”, Apple seems to be developing an even ‘smarter’ Smart Cover for the iPad by evaluating new ways to show contextually relevant information and allow quick access to device controls based on the position of the iPad’s Smart Cover, AppleInsider is reporting. The source notes that the filing may hint at future iPads with even fewer physical buttons. 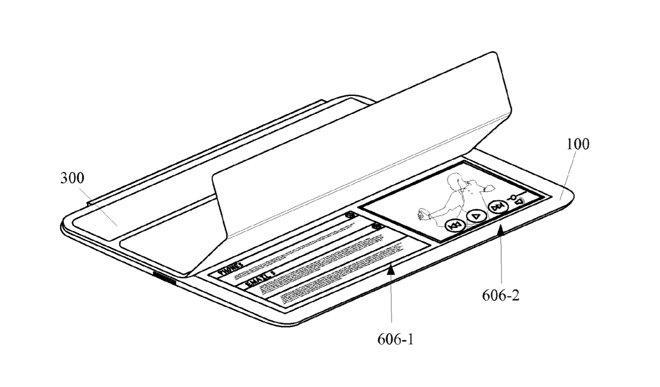 The filing details a method by which users could access information on an iPad by only partially opening the Smart Cover. “The device’s ease of use can be increased by enabling access to certain resources or features without requiring the user to unlock the device,” states the application. Folding away the first segment of the Smart Cover could reveal the latest notification, such as the subject and sender of an email message, while further opening the cover could show an expanded e-mail interface.

Gestures could also be designated for use in adjusting device parameters while in so-called “peek mode.” One example given by Apple is the ability to adjust the iPad’s display brightness by opening the first segment of the Smart Cover and swiping laterally across the display. Similarly, swiping vertically could raise or lower the speaker volume, while a circular motion could enable or disable the orientation lock. This could be accomplished with or without the aid of on-screen graphics.

Apple also envisions a scenario in which users could start with the Smart Cover fully open, and reduce the display area by closing segments of the cover. For example, a video playing in full-screen mode with an open Smart Cover could be automatically reduced to fill the available screen real estate as the cover is closed.

Apple notes that other sensors like ambient light sensors or iSight camera may also be leveraged to determine the Smart Cover’s position.

Music streaming giant Spotify's shares surged as much as 10% today after the company reported Q4 earnings that beat analysts’ revenue estimates with strong user growth. According to CNBC News, Spotify reported 489 million monthly active users for the quarter, up 20% year over year. There were 33 million net additions to monthly active users...
Usman Qureshi
30 mins ago

1Password developers have just shared a preview of all the new features and improvements coming in their next major update, especially for iOS users. Reorder fields and sections inside items One of the biggest improvements in the forthcoming 1Password 8 update will be the ability to reorder fields and sections within items. "Just edit the item,...
Usman Qureshi
44 mins ago