Today, Apple has officially announced (via MacRumors) that it will video stream Paul McCartney’s concert live on Thursday, February 9, supporting his new album’s release. The concert is not only being streamed via iTunes on Mac and PC, but will also be available directly on users’ Apple TVs, signaling new efforts by Apple to increase the utility of its set-top box. For past many years, Apple has been streaming the annual concert festival in London via iTunes as well as through an App Store app for the 2011 series. 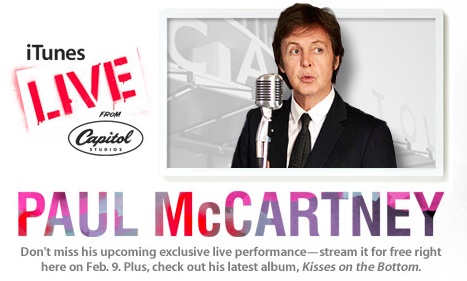 Here is the announcement:

To celebrate the release of Paul McCartney’s latest album — available now — we’re streaming his exclusive performance at Capitol Studios on February 9 at 7 p.m. (PST). Watch the concert on iTunes on your computer, or stream it on your TV using your Apple TV — just choose iTunes Live from the Internet menu.