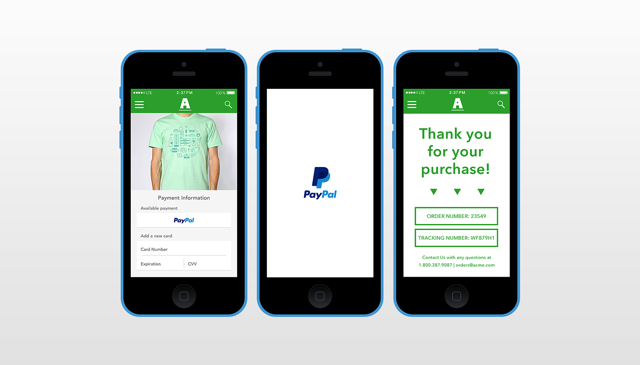 One Touch™ by PayPal and Braintree, one of the fastest ways to pay on any mobile device, will soon let shoppers who have downloaded the PayPal app pay with essentially one touch in the apps of participating merchants. PayPal has today announced in a press release that One Touch payments will offer “a magical experience that every mobile user will come to expect”, similar to the experience PayPal pioneered for online shopping many years ago.

“Starting today, One Touch payments are now open for developer beta with select merchants, and will be available to any developer using the Braintree v.zero SDK and all PayPal app users in the coming weeks. With One Touch, PayPal’s 152+ million active users will be able to securely pay in many of their favorite mobile apps in a single touch, making remembering user IDs, passwords and card numbers a thing of the past.”

PayPal notes that One Touch payments will be as trusted and secure as any other PayPal transaction. “PayPal and Braintree keep your financial details under lock and key and provide the industry’s best fraud management tools”. One Touch PayPal payments are now open for developer beta with select merchants using the Braintree v.zero SDK in the US.

To learn more about One Touch, visit the official page.