PCMag has shared results of their ISP speed tests for gamers in Canada for 2019. The results are not just based on speeds, but also the quality of connections based on latency and jitter (response time).

PCMag says despite being a mobile provider, Virgin Mobile had “the best Gaming Quality score we’ve seen out of any Canadian ISP.” 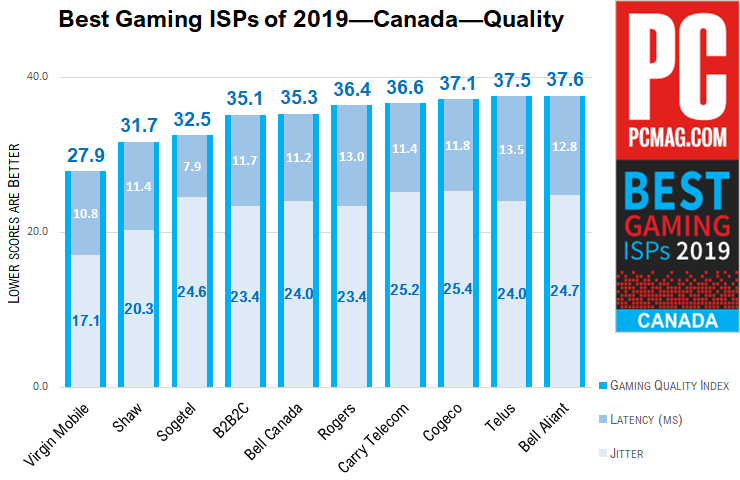 Western Canada’s Shaw is new to the list, while third place saw Quebec’s Sogetel take the win, followed by B2B2C in fourth, then Bell Canada in fifth and Rogers in sixth, respectively. Telus scored in ninth place, behind Carry Telecom and Cogeco and ahead of Bell Aliant.

As for the best gaming ISPs by province for 2019, British Columbia took the top spot, followed by Alberta. BC had a Gaming Quality Index score of 34, “thanks to excellent connections from Shaw and Telus,” while Alberta came second with a score of 41.5, also from these same ISPs. Last year, the best Gaming Quality score was in Quebec at 57.2.

Toronto and Montreal—the two biggest cities in the test—saw scores of 53.1 and 56.3 respectively, which are not “particularly great gaming quality scores”, according to PCMag.

Test results are acquired via the PCMag Speed Test tool, with the following methodology to calculate Gaming Quality Index scores:

When you perform the test it records the name of your ISP, your location, and the usual info on the connection like download and upload speed. For our Fastest ISPs stories, we use the up/down number of Megabits per second (Mbps) to create what we call the PCMag Speed Index. That’s a score that lets us directly compare ISP to ISP for speed. The formulae is 80 percent of the download speed plus 20 percent of the upload speed, rendered in Microsoft Excel as =((0.8*100)+(0.2*20)); that’s our way of saying download is probably a little more important than upload, but we provide all the numbers so people can decide for themselves.

What ISP are you using for gaming right now?