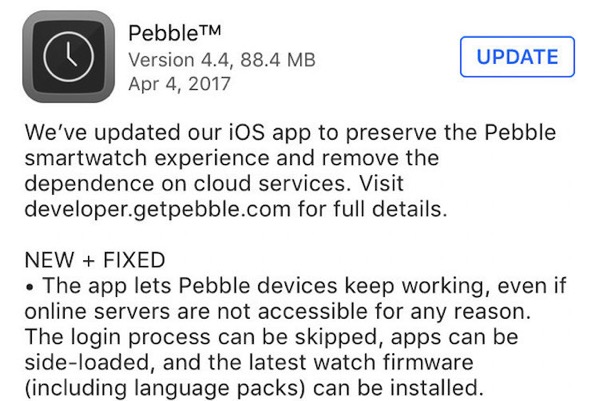 Following Pebble’s acquisition by Fitbit last year, the company had announced that Fitbit would be “going out of its way” to keep the smartwatch platform’s software and services running through 2017, even after its servers go offline. This week, Pebble’s apps for iOS and Android have finally been updated to remove the dependence of Pebble smartwatches on its cloud services (via The Verge).

Pebble released an update this week that decouples the smartwatches from their dependency on cloud services, meaning that whenever Pebble’s servers do shut down, users will still be able to side load apps and new firmware to their smartwatches.

It’s not a perfect fix, and there are still plenty of answered questions. Features like dictation, messaging, and weather, for example, are all based on cloud services, and Pebble still hasn’t commented on whether or not it’s found a way to keep those working for users going forward.

From now on, if a Pebble authentication server can’t be reached, the mobile apps will allow Pebble devices to keep working. The login process can be skipped, apps can be side-loaded, and the latest watch firmware, including language packs, can be installed.

iOS users can update their Pebble app for free from the App Store, while Android users enrolled in the Pebble beta program can download the update from Pebble’s beta channel.