Pebble to Share “Exciting Developments” on Nov. 6 at 10AM PST

The makers of the Pebble Smart Watch emailed their original Kickstarter backers earlier this evening to announce some big news coming on November 6, which will be live streamed to the world at 10AM PST. The announcement looks to be geared towards developers of the watch platform.

Apologies for the radio silence the last couple months. We know it has been a long time since we shared an update, but we’ve had our heads down focusing on some exciting developments and big news is brewing.

This Wednesday, November 6th, we’ll be sharing the details. You’re invited to join our (hopefully less blue) livestream at 10am PST to hear the news first hand. Just visit www.getpebble.com Wednesday after 9am PST for a link to the event. If you’re currently developing for Pebble, or interested in creating apps for Pebble, then you should definitely tune in!

We’ll also post the news for those who can’t join and a recording of the livestream will be available immediately following the event. Eric and Pebble’s developer support team will also be available to take questions on a Reddit AMA on Wednesday at Noon PST. 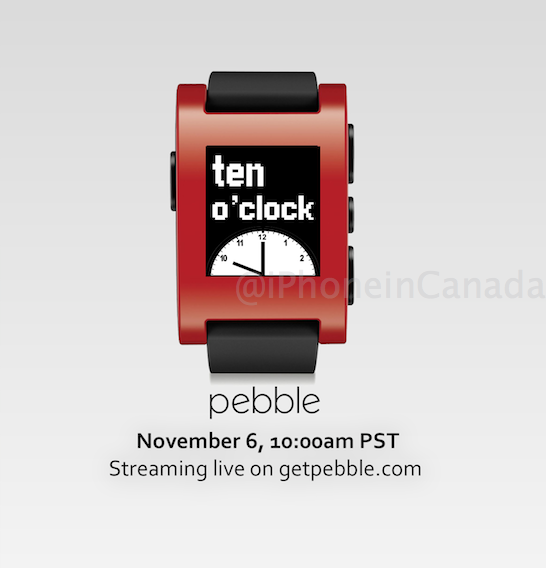 Pebble says 460 Kickstarter backers (out of 68,929) are still waiting for their watch to arrive, which has been delayed due to incorrect email and shipping addresses. If you’re still waiting you’re encouraged to visit http://bit.ly/kswaiting to fill in your information.

The Pebble Smart watch landed in Canada recently, as retailers Future Shop and Best Buy launched pre-orders of the watch, set to arrive in mid-November. You can read our full Pebble watch review here.

How are you liking your Pebble smart watch?