Apple supplier Pegatron has made the headlines several times due to the poor working conditions it provides workers assembling the iPhone 6s. New York-based China Labor Watch (CLW) is back again with a fresh report emphasizing that nothing has changed during the past year: The low wages and long working hours persist at Pegatron’s factory, and CLW urges Apple to look into the matter (via CNET).

A CLW investigator went undercover in Pegatron’s factory where the supplier assembles iPhone 6s units and found that Pegatron’s young production workers toil six days a week in 12-hour shifts. Each day they are paid for 10.5 hours’ work, not counting 15 minutes of unpaid meetings and mandatory overtime between 5:30 p.m. and 8:00 p.m.

The percentage of compliance with Apple’s 60-hour workweek has risen from 7% in 2014 to 42% in 2015. In September 2014, 50% of workers put in over 90 hours of overtime for the month, but a year later, only 32% had done so. The maximum overtime recorded dropped from 130 hours to 119 hours. Despite these limited changes, 58% of workers continued to have workweeks in excess of Apple’s 60-hour workweek standard in September, and if we were to include the 90 minutes of unpaid meetings workers must attend per week, then the proportion of workers in excess of 60-hour workweeks would be notably higher.

Before overtime, employees in the iPhone assembly line earn the local minimum wage of $318 per month, or about $1.85 per hour. When it comes to the dorms, the investigation uncovered poor conditions provided by Pegatron: 14 people are crammed into a room, bed bugs are spread throughout the dorm, and mold grows along the walls, etc.

CLW published its first in-depth investigative report on working conditions in Pegatron’s Shanghai and Suzhou-based factories under the title of Apple’s Unkept Promises detailing an array of serious violations of labour rights, and since then it has regularly gone undercover to see if anything has changed. 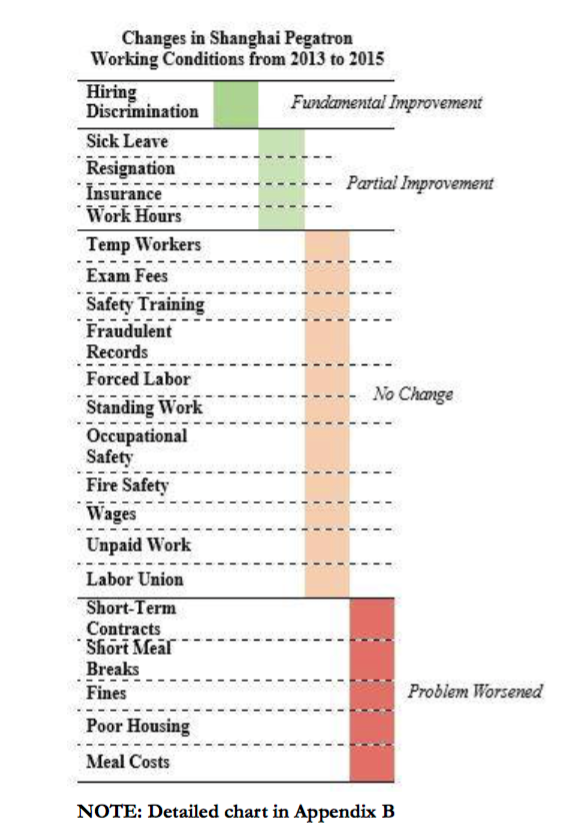 The verdict: two years with little progress. The most recent (September) investigation found 23 categories of legal and ethical labour rights violations at Pegatron. CLW urges Apple to institute measures throughout all of its suppliers to improve workers’ conditions.