Compared to 2015, distracted driving convictions are down in P.E.I., according to data from the Department of Transportation. Numbers had surged starting in 2011 but so far in 2016, there have only been 147 convictions, compared to 327 in total last year.

But RCMP say the numbers may not tell the whole story, as they claim it’s harder to catch people in the act with their cellphones now. 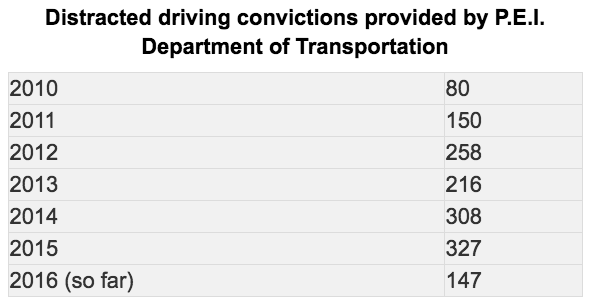 Sgt. Leanne Butler Operations NCO of Queens Detachment, told CBC News “We find that people are hiding it more and it’s harder for us to detect,” adding “I don’t believe that the usage is going down. I think people are trying to take means to hide it so that they don’t get caught and that’s even more concerning for us.”

Butler says they continue to see people use their cellphones at red lights, which is also a ticketed offence, which surprises many people.

Fines for distracted driving were increased in the province back in 2015, some of the harshest in the country, with tickets ranging from $500 to $1200. Despite the stiff fines, Butler believe people will still use their phones in the car. She suggests more education is needed to combat the problem, while shocking ad campaigns may help further bring forth the dangers of distracted driving.

According to the Insurance Bureau of Canada, distracted driving makes up 8 out of 10 collisions reports.