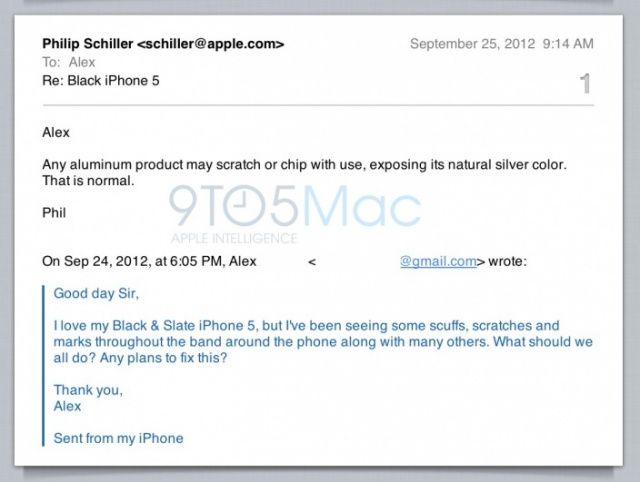 Apple consumers are mainly happy with the iPhone 5; from the taller display to even the faster hardware. But one of the largest complaints about the device is the two-toned anodized aluminium finish added to the back-plate. People are receiving the iPhone 5 and scratching the aluminium in their pocket, on the table, etc. Various people have even received the iPhone 5 scratched out of the box.

The issue hasn’t been acknowledged by Apple yet, until today. This is unfortunately a problem that Apple senior vice-president of marketing, Phil Schiller, views as ‘normal.’

A customer named Alex had an email conversation with Schiller, and stated the following: (via 9To5Mac)

“I love my Black & Slate iPhone 5, but I’ve been seeing some scuffs, scratches and marks throughout the band around the phone along with many others. What should we all do? Any plans to fix this?”

Phil Schiller being a great businessman, answered the email within 24 hours with the following:

“Any aluminum product may scratch or chip with use, exposing its natural silver color. That is normal.”

This probably isn’t the result everyone was hoping for. We know that any aluminium plate is prone to scratches, but the point is we don’t want a scratched up device. The only way to prevent scratches currently is to purchase a case, or a protective shield for the iPhone’s back panel. We could also purchase the white model over the black, as the silver scratches would match the panels tone.

What do you think Apple should do about the easily-scratchable aluminium panel?

According to MacRumors, there is a microphone issue plaguing some Apple Watch Ultra and Apple Watch Series 8 units. Users have reported an issue where they are unable to use Apple Watch's microphone to talk to Siri, make a phone call, record voice memos, and more. The microphone simply becomes unresponsive after some time, rendering it...
Nehal Malik
26 mins ago