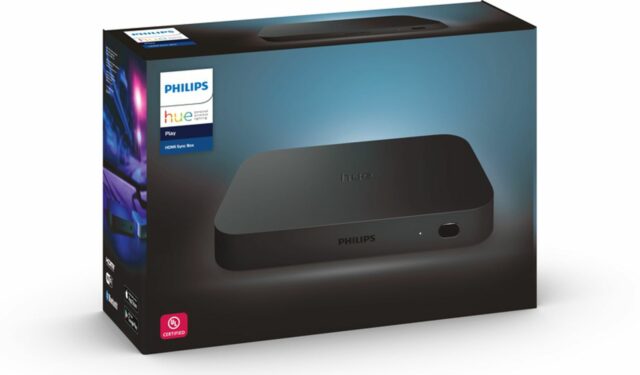 The Philips Hue Play HDMI Sync Box gained a fairly substantial update. The box which syncs the Philips Hue lights to the images on your television screen now supports HDR10+ and Dolby Vision. In addition, voice commands through Siri, Google Assistant, and Alexa are enabled.

Signify issued a press release, signalling the new software update for the Philips Hue Play HDMI Sync Box. At launch, the sync box was only able to read content at 4K 60Hz and the standard HDR10. The latest software update grants support for true HDR10+ and Dolby Vision, both of which should please home theatre enthusiasts. Of course, there is the caveat of owning a compatible television.

Additionally, the Philips Hue Play HDMI Sync Box now supports voice commands from Alexa, Google Assistant, and Siri. By using on the three assistants, you’ll be able to turn the Philips Hue lights on or off. Voice commands also enable you to switch HDMI inputs, and swap between audio, video, and gaming mode. For now, voice commands will only be supported in English.

Users with an infrared TV remote or Harmony remote control can configure their remotes to work with Philips Hue Play HDMI Sync Box. As you can imagine, swapping between HDMI inputs, and turning the device on or off can be done manually through their remote.

Philips Hue Play lights provide an immersive experience when used with a TV. After completing the software update on a mobile device, users can now take advantage of the new features.