Ever wonder how much larger or smaller other smartphones are compared to your iPhone? Well, you can now do a straight up comparison on the web via the website Phone Size. Just add your phones (in our case, the iPhone of course), enter your screen type and size, and voila–the actual sizes of phones appear on your screen giving you a pretty good comparison of what other phones are like.

Along with comparing the size, specifications such dimensions, weight, screen size, screen resolution and pixel density are also included underneath.

It’s a pretty cool way to put your iPhone up against others. Here is the iPhone 4S next to the Nokia Lumia 800, Galaxy Nexus S, and the BlackBerry Bold 9900/9930 (which phone here doesn’t belong?): 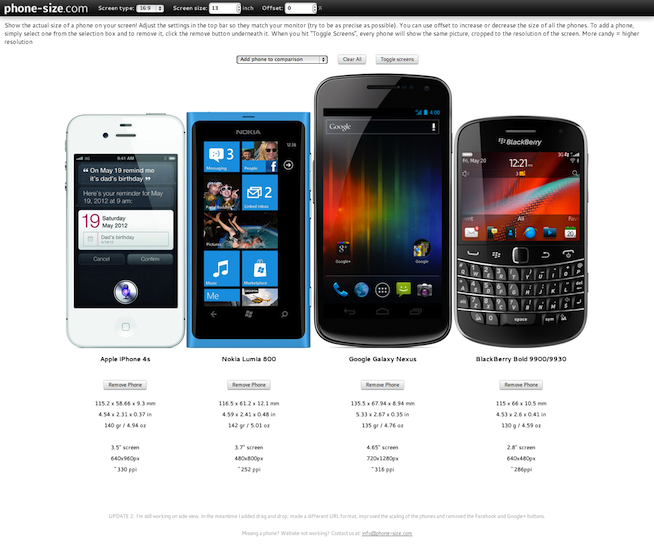 Give this a try yourself and tell me what you think–any new phones in your future other than an iPhone?

Apple's long-awaited AR/VR headset may not start shipping until the second half of 2023 due to a delay caused by some "software-related issues," according to TF International Securities analyst Ming-Chi Kuo. Kuo previously had the headset pegged for a second-quarter release. He said in a tweet that his sources indicate components for the mixed-reality headset...
Nehal Malik
21 mins ago