Pinterest Introduces New Tools for Collaborating with Friends and Family 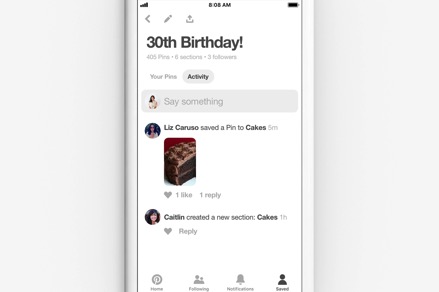 Pinterest has today announced the launch of a new set of collaboration tools, that make it easy to easier to plan events and projects with your friends and family. Users can now have conversations in group boards with the other members of their board using the new group activity feed.

“The majority of Pinners use group boards to collaborate with family and friends as they plan parties, events, and projects together. These updates are in direct response to requests from Pinners just like these, and they’re part of our ongoing effort to make Pinterest a more productive place to bring events and other projects to life.”

The activity feed helps you keep track of what’s happening on the board, like when someone saves a new Pin or adds a new section, or a new member joins.

Having a conversation about a specific Pin is also more seamless than before. You can weigh in with a quick “like” or comment, @-mention a collaborator or reply to start a new thread. Only members of the group can see your conversations.

The new tools are rolling out today to all Pinterest users on both mobile and web.