Apple’s shares saw a surge of nearly 2% at the beginning of this week, thanks to Raymond James analysts upping their price target to $280 citing stronger sales estimates for the company’s latest iPhone 11 lineup. However, Piper Jaffray’s Craig Johnson believes the Cupertino giant’s stock could rise another 25% (via CNBC News). 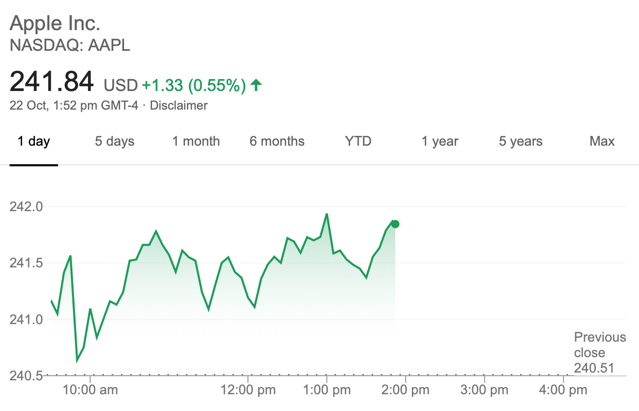 “The trend looks great,” said Johnson, while pointing out that Apple’s stock has just broken out to new all-time highs. He continued that AAPL is well on track to hit $300, a move that would mark a 25% upside from yesterday’s close while also establishing new highs for the stock.

Similarly, Strategic Wealth Partners president Mark Tepper, who is highly optimistic about growth in Apple’s wearables and services sectors, says there’s a lot more to like about Apple.

“What the call doesn’t really mention are some of the things that interest us when it comes to Apple. For the first time in a long time, the iPhone now makes up less than 50% of Apple’s revenues. Why is that important? Because they’re in the process of becoming less reliant on just one product, they’re diversifying their business,” Tepper said during the same segment.

So far, Apple has been the best Dow performer this year after climbing 52%.

In this week's edition of his Power On newsletter, Bloomberg's Mark Gurman speculated that Apple could launch an even pricier iPhone model, positioned above the "Pro Max," as early as 2024. The renowned analyst previously reported that Apple could rename this year's iPhone 15 Pro Max the iPhone 15 "Ultra." However, he now believes the company is...
Nehal Malik
55 mins ago