In a research note published today, Piper Jaffray analyst Michael Olson has raised his target price for Apple’s stock (AAPL) to $250 per share, roughly 12% higher than it was trading before the market opened today, just ahead of the annual iPhone event next week.

According to veteran journalist Philip Elmer-DeWitt, Olson’s recent survey of iPhone customer base has found that nearly two-thirds of users are on a device that is two years old or older. People with older iPhones are considered most likely to purchase a new one, predicts the analyst. 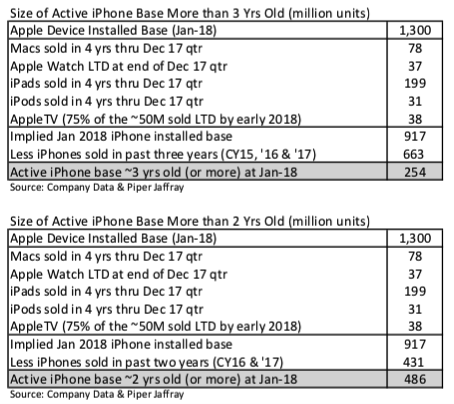 “We, however, also expect a lower iPhone ASP, modeling $735 for FY19 vs. the Street at $757. This is based on our expectation for a large portion (31%) of FY19 iPhone mix to be iPhone X “Lite” (otherwise known as iPhone 9), which will likely carry a lower ASP than iPhone X or iPhone Xs (or Xs Plus). In our survey of iPhone users who did not upgrade to iPhone X, 31% said that their failure to upgrade was due to price. We believe a lower price point for a next (“X”) gen form factor will be attractive to potential upgraders.”

The Piper Jaffray analyst estimates that Apple will sell 223 million iPhones in the fiscal year that begins next month.

The display technology experts over at DisplayMate have crowned the iPhone 14 Pro Max's screen the best to ever grace a smartphone, giving it their highest-ever A+ rating and "Best Smartphone Display Award." DisplayMate is one of the world's leading authorities on display technology. The corporation's reviews and reports are based on comprehensive, objective laboratory tests...
Nehal Malik
11 mins ago