Add Pit Stops to Your Trips with Google Maps for iOS

Last year, Google Maps introduced the ability to add detours to your route without leaving the navigation screen. The feature however, was only available to Android users. Now, Google has announced that the ability to add pit stops to your trips will begin rolling out on Google Maps for iOS starting today, in all the countries where Google currently offers navigation i.e. in over 100 countries worldwide. 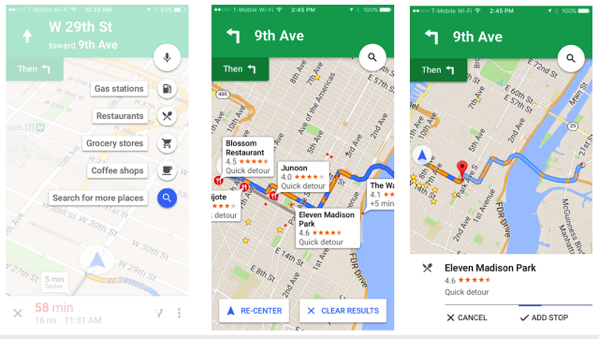 Here’s how the feature works on Google Maps for iOS:

When you’re in navigation mode, simply tap the magnifying glass at the top right corner of the screen to see a menu of helpful options for places you might need to stop at, like gas stations, grocery stores, or restaurants. If the drop-down options aren’t what you need, you can tap the search icon or use voice commands to search by specific name or category to find what you’re looking for.

Google explains that the search results will show you the approximate time that a pit stop will add to your trip, along with user ratings, helping you to choose from the best available detour option.

So the next time you plan to make some stops along the way on your trip, give the new feature a try. You can grab the latest version of Google Maps for iOS at the following App Store link: