Sony has just revealed an eclectic mix of compelling titles coming to PlayStation Now subscribers in August. The lineup includes August: Nier: Automata, Ghostrunner, and Undertale. All are must-plays, and all three are available to play from today, Tuesday, August 3. 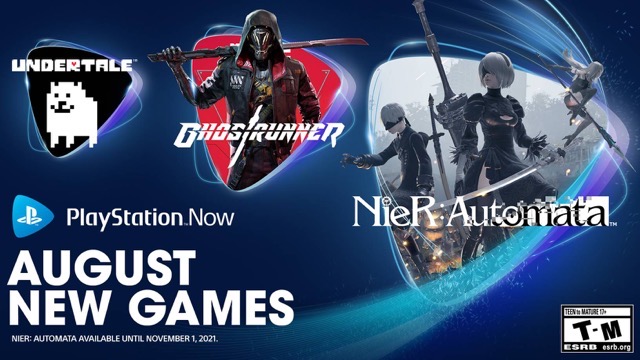 In this captivating action RPG, invaders from another world attack without warning, unleashing machine lifeforms. To break the deadlock, a new breed of android infantry is sent into the fray: the YoRHa squad. Join androids 2B and 9S in their ferocious battle to reclaim an overrun dystopia and experience mesmerizing, high-speed combat that’s the specialty of development studio PlatinumGames.

Wield a blade and perform amazing parkour feats to battle your way up a megastructure tower city in this intense, fast-paced first-person adventure. Slice your enemies with a monomolecular katana, dodge bullets with your superhuman reflexes, and employ a variety of specialized techniques to prevail.

One-hit one-kill mechanics make combat fast and intense. Use your superior mobility (and frequent checkpoints!) to engage in a fearless, never-ending dance with death.

In this top-down adventure, control a human who falls underground into the world of monsters. Now you must find your way out… or stay trapped forever! Explore a rich RPG world full of strange and delightful characters where violence isn’t the only answer: every enemy can be defeated nonviolently.

Negotiate out of danger using a unique battle system. The choices are yours—but are you determined enough to prevail?