Sony announced the selection of free PS Plus games for July earlier this month, and now, the company has revealed its first-ever Game Catalog lineup for the all-new PlayStation Plus, which will be available for Extra and Premium members on July 19. 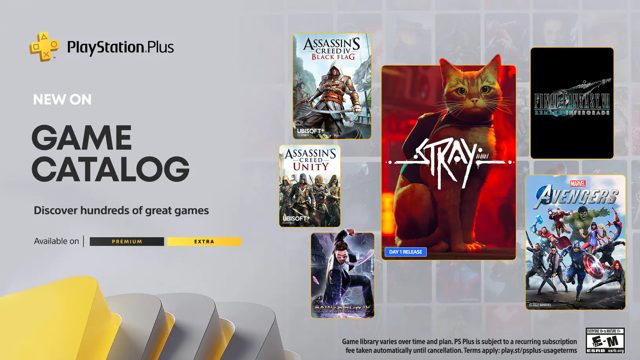 PS Plus is Sony’s premium subscription service for its PlayStation consoles, which not only unlocks online multiplayer but also gives members access to a set of new games every month.

Stray is a third-person cat adventure game set amidst the detailed neon-lit alleys of a decaying cybercity and the murky environments of its seedy underbelly. See the world through the eyes of a stray and interact with the environment in playful ways.

This expanded version of Final Fantasy VII Remake has been enhanced for PS5, offering extra immersion with the DualSense controller, improved visuals, and comes bundled with FF7R Episode INTERmission.

Marvel’s Avengers is an epic, third-person, action-adventure game that combines an original, cinematic story with single-player and co-operative gameplay. Assemble into a team of up to four players online, master extraordinary abilities, customize a growing roster of Heroes, and defend the Earth from escalating threats.

Also available on July 19 are: