According to a report by the Calgary Sun, Canadian veterans and their families are outraged with the presence of Pokémon Go players at Calgary’s military memorials, and have urged them to refrain from hunting their digital preys at such locations. “Please be respectful and refrain from playing Pokémon Go when visiting Canadian War Cemeteries & Memorials”, said a tweet by Veterans Affairs Canada on Saturday. 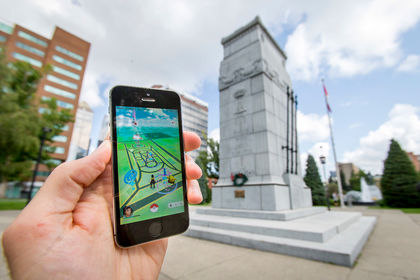 The Minister of Veterans Affairs and Calgary MLA Kent Hehr also retweeted the request, asking Canadians to “Please be respectful”. Calgary has several memorials honouring veterans and fallen soldiers spread through the city. The publication points out that Central Memorial park is the city’s largest with three “Pokéstops” at separate memorials, including the cenotaph (pictured above) where veterans and the public gather every Remembrance Day. A nearby fountain overlooking the cenotaph is a “Pokémon Gym,” where players gather to do battle with other gamers.

“You don’t hide a Pokemon Go creature behind a monument,” said retired Lt.-Col. Rick Wright of the Canadian Association of Veterans in United Nations Peacekeeping (CAVNUP).

“That’s part of the problem, most people don’t understand what a memorial is, they think it’s a hunk of concrete. “If you don’t have the background knowledge, you have no idea. To me, that’s one of the faults of the education system.”

Memorials at Garrison Green — including Peacekeepers Park, where Sunday’s sombre ceremony took place, and Buffalo Park — are also “Pokestops,” as well as the placards placed on street corners named after veterans of Canada’s Peacekeeping operations.

Memorials in the U.S. have also been plagued by Pokémon players, with the U.S. Holocaust Museum and the Arlington National Cemetery both requesting visitors to refrain from hunting Pokémon while visiting the monuments.

In partnership with Huish Outdoors, Apple has released the new Oceanic+ dive app for the Apple Watch Ultra, which the company has been highlighting as the closest thing to an ‘official’ Apple dive app. In a detailed hands-on review of the Apple Watch Ultra and the Oceanic+ app, the folks over at DC Rainmaker have...
Usman Qureshi
43 mins ago