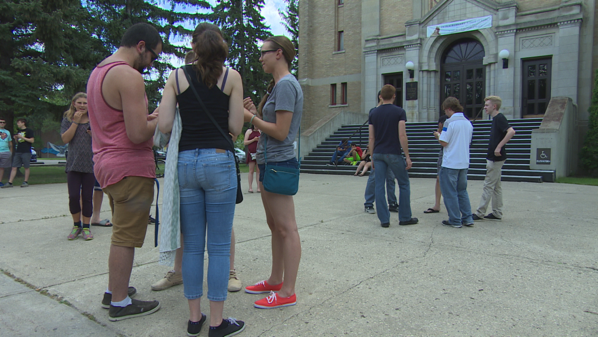 According to Sean Ryan, one of the organizers of this Sunday’s Pokémon Go event held in Regina’s Cathedral neighbourhood, over 1,000 people attended the game festival. “There’s a good 1,000 to 1,200 people here,” he told CBC News during the event, adding they were anticipating about 200. “It’s awesome. It blew away our expectations”.

“This game allows us to go out and still play and interact with people at the same time,” he said. Ryan added the game has also been a fun way to exercise. “I’ve lost a good 10 pounds just walking around playing this game with all my friends.”

Ryan noted the game is played around the world and it is nice to get in touch with players from the local community. “It’s really great that it’s bringing this community together,” he said. “Everybody has just come together. It’s just awesome.”

The 29 year old explained that the people behind the Regina group, which began on Facebook, wanted a way to communicate and keep in touch with other local players. They wanted to make sure that if there were events for Pokémon, they could get everybody together in the same place at the same time,” he said. “Clearly … we’ve done just that”.

The festival, dubbed a Lure-a-Palooza, had people milling about for several hours as they wandered around the neighbourhood glued to their smartphones.