A couple of weeks back, Apple rolled out HomePod 14.3 software update for HomePod and HomePod mini owners, which included “general performance and stability improvements,” according to Apple. 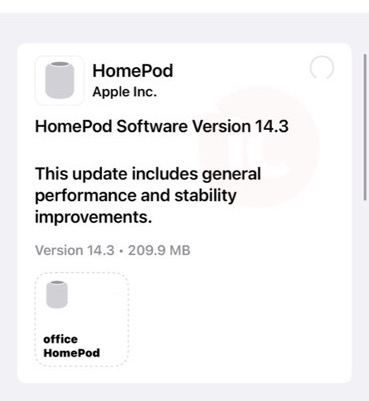 However, it seems that Apple has also added support for powering the HomePod mini through some 18W adapters in the same software update. As noted by The 8-Bit, users can now use the 18W power adapters that shipped with the iPhone 11 to power their HomePod minis.

Prior to the 14.3 update, users wanting to power their HomePod minis with an 18W adapter were met by an orange glowing light on the HomePod, which according to Apple, means that the HomePod mini is plugged into a power adapter that’s not rated 20W (9V ~2.22A).

Since the HomePod mini now accepts power from an 18W adapter, users on Reddit have also been testing it out with 18W power banks and they seem to work.

You can update your HomePod by going to the Home app, long-pressing your HomePod, then you’ll see the software update available to download and install.