Back in September, Instagram hit their 10 Millionth user. Yesterday, the popular app had another important user milestone; the President of The United States. 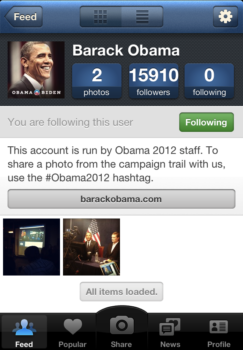 Instagram is a photo sharing app that allows you to edit and upload your photos and then interact with other users in many of the same ways Twitter does. The differences are that everything you post has to have an accompanied photo and it’s a mobility only platform meaning that you have to use the app to share and interact.

The Obama machine has always been social media savvy so it’s no surprise that the app has been added to their information arsenal. What makes this foray stand out is the reality of the mobility-only platform however, the campaign team obviously believes the app has enough reach to make it worth their effort. Interesting timing, to be sure, as the Republican Iowa Caucus took place on the very same day he joined up.

“As we get closer to election day in 2012, we look forward to seeing how campaigns, reporters and voters use Instagram to tell the story of the 2012 Presidential Election through photos.”

Obama’s first two photos revolved around his video appearances at the Iowa Caucuses which marked the first day voters have had any kind of say in the GOP Presidential nomination race.

The Dyson V12 Detect Slim makes some significant quality of life improvements while not compromising on power. I’ve been using Dyson vacuums for the better part of three years. Across many of its previous cordless devices, I’ve been thoroughly impressed. Dyson typically delivers when it comes to power and suction. Plus, I’ve often found battery...
Steve Vegvari
50 mins ago