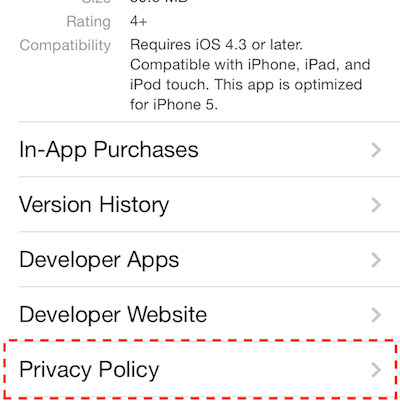 According to the updated App Store guidelines which come into effect from October 3rd, all new apps and updates are required to include a link to their developer’s privacy policy in the app metadata, 9to5Mac is reporting. The announcement was made to the developers through App Store Connect last night.

While App Store listings have had a privacy policy URL metadata field for a long time, they have only been mandatory for apps that use subscriptions. However, this requirement is now being applied to all App Store apps.

“Apple says the privacy policies must identify what data the app collects, in what manner, and how it is used. It is also the responsibility of the app developer to confirm that the behavior of any embedded third-party frameworks complies with the parent app’s privacy policy. Apple also says that apps must clearly explain data retention policies and detail how a user can revoke consent and request deletion of any personal data stored.”

On iOS devices, customers will be able to tap on the link to the privacy policy and read it in Safari. On Apple TV, however, developers will need to copy and paste their privacy into a text box when they submit their apps so that Apple TV can display it.

In a recent interview, Apple engineer Esge Andersen discussed how the company achieved improved sound quality regarding the AirPods Pro 2. Much of the improvements came without the integration of lossless audio and it is all thanks to improved airflow instead. Speaking with What Hi-Fi?, Andersen pulled back the curtain about the improvements to audio...
Steve Vegvari
59 mins ago