According to Katy Huberty, an analyst at Morgan Stanley (via Fortune), Apple could sell nearly a quarter billion iPhones next year. The number would be more than double that of this year’s iPhone sales. According to Huberty’s research, Apple could sell an astounding 41 million units in the first quarter alone of 2012. Her predictions are based on her own research and a consumer survey by AlphaWise that pegs demand for the iPhone next year 40% higher than anticipated by Morgan Stanley in its “base case” scenario. 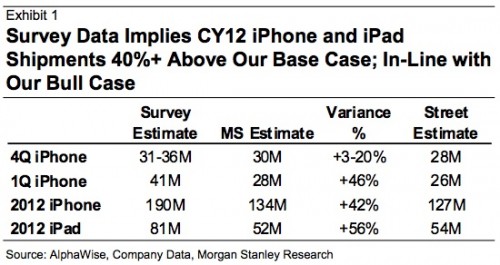 – iPhones are selling surprisingly briskly. Based on the survey and last week’s comments from AT&T (T), Huberty estimates that Apple (AAPL) could ship anywhere from 31 to 36 million iPhones this quarter — as much as 20% higher than the 30 million she’s modeling and nearly 30% higher than the 28 million Wall Street is expecting.

– iPhone demand is accelerating. “Surprisingly,” she writes, “US consumers expect to buy more iPhones in C1Q12 than C4Q11″ (emphasis hers). Even discounting the survey results 10%, that suggests Apple could sell 13 million iPhones in the U.S. and 41 million worldwide next quarter. Morgan Stanley’s model has Apple selling 30 million iPhones in calendar Q1 2012.

Summing up, should those projections turn true, the Cupertino giant could sell a record breaking number of iPhone handsets during the next calendar year.