Widely-used third-party YouTube application “ProTube” has been removed from the App Store by Apple recently following several take-down requests from Google received by the app’s developer. 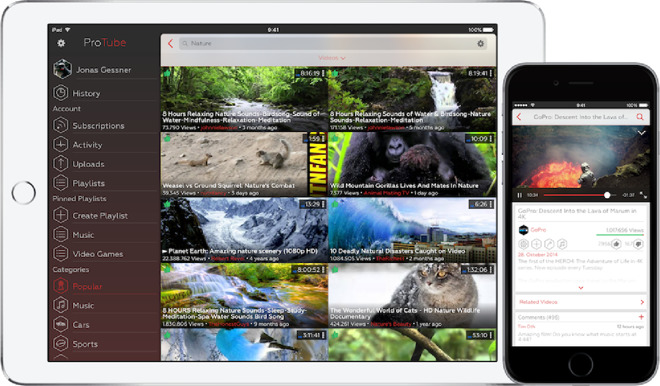 In a statement on his website, ProTube developer Jonas Gessner said he was “very sad to announce that ProTube was removed from the App Store by Apple on September 1, 2017.” According to a report from Dutch website iCulture, the action reportedly came “after multiple requests and threats by YouTube which ultimately led Apple to suddenly pulling the app from the App Store”, said Gessner.

YouTube first requested Apple to remove my app well over a year ago, initially just stating that my app violates their Terms of Service. This was a generic takedown request they sent to many YouTube apps at once. They later started going into more detail, even stating that I could not sell the app as that alone violates their ToS. They basically wanted me to remove every feature that made ProTube what it is – that includes the player itself that allows you to play 60fps videos, background playback, audio only mode and more.

Without those features ProTube would not be any better than YouTube’s own app, and that is exactly what they want to achieve. YouTube wants to sell its $10/month [YouTube Red] subscription service which offers many features that ProTube also offered for a lower one time price, so they started hunting down 3rd party YouTube apps on the App Store.

According to the report, Gessner said he initially considered several options to end the dispute with YouTube, including removing all the contested features and making the app free, but ultimately he decided against this because “everyone who paid for ProTube’s standout features would suddenly get an app update that removes all those features, resulting in a useless app.”

The app was popular due to the fact that it contained a number of features that Google’s official YouTube app lacks, such as background playback and an audio-only mode.

Gessner also states that a number of third-party apps are being targeted by Google with take-down requests, so we may see more of our favorite YouTube apps disappear in the near future.

Following the acquisition of animation production company Dynamo Pictures, Nintendo has launched a brand new website for its 'Nintendo Pictures' branch. At the time of the acquisition, it was known that Nintendo had plans to rename the Japanese company. Nintendo also previously announced its intentions to utilize the company's specialties to focus on  "producing visual...
Steve Vegvari
6 mins ago