PS Plus January 2021 Free Downloads: Greedfall and Shadow of the Tomb Raider

Sony has just revealed its PlayStation Plus monthly free games lineup for January 2021, which includes two PS4 titles – action adventure Shadow of the Tomb Raider and action RPG Greedfall, as well as an exclusive RPG title for PS5 owners Maneater. 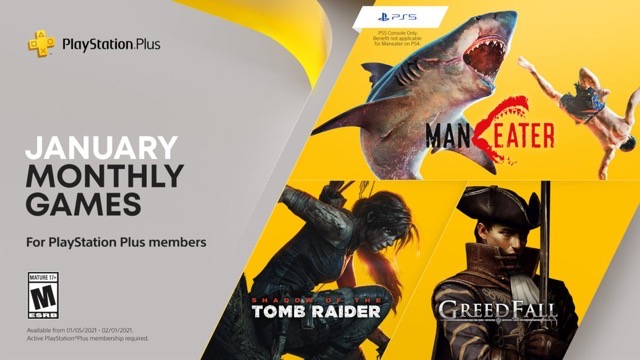 Shadow of the Tomb Raider (PS4)

Fight, explore, craft and survive amid the dense and perilous jungles of South America in Lara Croft’s biggest adventure to date as you race to save the world from a Maya apocalypse.

Outgunned and outnumbered, you need to use your surroundings to your advantage; strike from the shadows and use mud to camouflage your presence.

In this stunning action RPG, explore uncharted new lands as you set foot on a remote island seeping with magic, and filled with riches, lost secrets, and fantastic creatures. Forge this new world’s destiny, as you befriend or betray companions and entire factions.

Maneater is a single player, open world action RPG (ShaRkPG) where you are the shark. Starting as a small shark pup you are tasked with surviving the harsh world while eating your way up the ecosystem.

Find the right resources and you can grow and evolve far beyond what nature intended, allowing the player to tailor the shark to their play style.

All games will be available starting Tuesday January 5 till Monday February 1.

Apple’s all-new HomePod 2 is launching tomorrow, February 3, 2023, with some early hands-on reviews and unboxing videos already hitting the web. Just ahead of the official release, Matthew Costello, Apple’s hardware vice president, has shared how Apple decided to resurrect a product it had discontinued in 2021. We deeply studied the learnings from the first HomePod...
Usman Qureshi
13 mins ago

Sony has today announced the release of its next PS5 system software beta, which introduces a handful of new features, including the highly requested Discord voice chat. The release introduces a variety of UX, accessibility, and social feature enhancements, as well as Variable Refresh Rate (VRR) support for 1440p resolution. Invited beta participants from the...
Usman Qureshi
39 mins ago