We continue to learn small portions of what the A6 CPU in the iPhone 5 contains, but a recent GeekBench report shows nearly everything about the A6 CPU that we need to know. The benchmarks have exposed a Dual-Core 1.02GHz ARMv7 processor and 1 GB of RAM.

The iPhone 4S was clocked at 800MHz, just beneath the clocked 1.02GHz on the iPhone 5. In addition the iPhone 5 contains 512 MB more RAM than its predecessor. 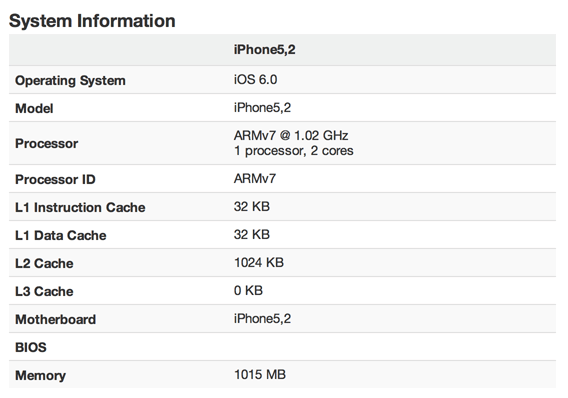 When the iPhone 5 was scored by Geekbench, it was given a whopping 1601! If you aren’t familiar with these scores, the iPhone 4S averaged a 629 and the iPad 3 averaged 766. If you recall, Apple said this new iPhone would double the speed of the 4S. This one Geekbench result proves the iPhone 5 more than doubled its predecessors speed.

If this Geekbench result is true, the iPhone 5 will actually be the fastest smartphone on the market. If you click here, or view the chart below, you can view the results for the top rated Android phones. The Galaxy S3 cuts the results close, but the iPhone 5 has a slight lead:

We’ve just discussed all the basic details of the iPhone 5 benchmarks, but if you would like to get down and dirty with the results, AnandTech has a full breakdown.