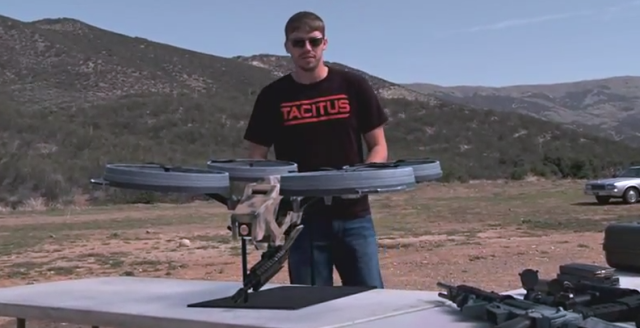 The quadrotor helicopter controlled by an iPhone is not a new thing. In fact iPhoneinCanada has reviewed one, in the past. This new prototype brings things to a whole new level, and introduces a possible new military application for this tech.

FPS Russia is known for testing some crazy weapons, and in one of their latest videos it looks like they are testing a prototype quadrotor helicopter, with a camera and machine gun on board, remote controlled by an iOS device. The footage looks great, and the prototype seems to work really well. I can’t help but be reminded of something from Call of Duty: Modern Warfare, or the flying machines from the Terminator movies! Prepare for SkyNet to become self aware and take over these quadrotors and kill us all! 😛 There have been some comments on the video that claim this could be “CGI enhanced”. The more I watch it, the more I think this could be a fake. Take a look at the video, and decide for yourself:

In all seriousness, this thing is scary. If this is a real prototype, I can imagine the US military would be taking a very close look at this. I am guessing it would connect to an iOS device via bluetooth, as I don’t think they have WiFi out in the middle of this field, so I’m not sure the range to control this would be that useful. I am, by no means, a military expert, so I’m just guessing.