The all-new Rachio 3 Smart Sprinkler Controller has just received Apple’s HomeKit support to become the first and only smart sprinkler controller that leverages the power of HomeKit and Siri, bringing simplified, central app control to sprinkler systems nationwide. The smart sprinkler is also fully compatible with other voice services including Amazon Alexa. 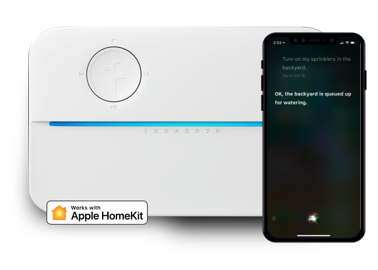 “We are excited to bring HomeKit support to Rachio customers,” said Chris Klein, CEO, and co-founder of Rachio. “HomeKit users already have a smart home, and now they can have a smart yard, too. Rachio consumers have been asking for HomeKit integration, and we are excited to deliver it to them with our new Rachio 3 Smart Sprinkler Controller.”

Effortless Setup – In only a matter of minutes, Rachio 3 is up and running in the Apple Home app.

Simple Control via App or Voice – Rachio 3 can be controlled using the Apple Home app on iPhone or iPad, or using Siri on any iOS device, Apple TV, Apple Watch or HomePod.

To learn more and order the Rachio 3 Smart Sprinkler Controller (US$229.99), visit this link.