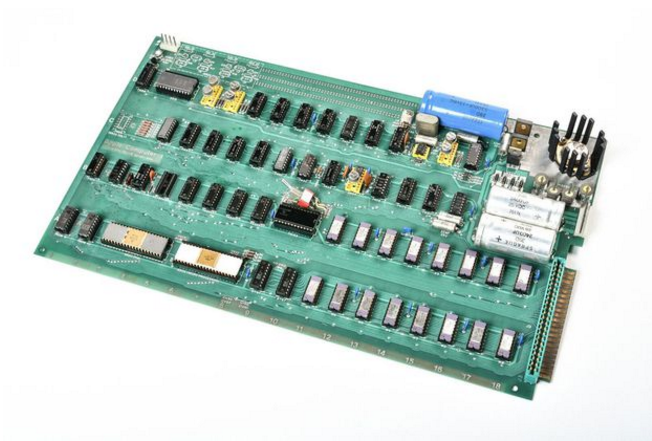 A rare motherboard, which is believed to be among one of the first hand-built prototypes of the Apple -1, pulled in $815,000 at an auction. The selling price fell short of its million dollar estimate, however it still pulled in a pretty high price.

The “Celebration” Apple-1 board came with the most complete set of documentation yet, marketing materials, a period-correct power supply, an original cassette interface board, and early Basic cassettes with boot instructions signed by early Apple employee and coder Daniel Kottke.

Apple co-founder Steve Wozniak believes that no boards of this type up were ever sold to the general public. It is believed that the board could be powered up, but the appraiser recommends against it in order to maintain the original configuration of the 40-year old computer.

Appraiser Corey Cohen believed it was a prototype or experimental board that used higher quality components than later boards. Interestingly enough, Wozniak doesn’t remember assembling any boards with the specific components on the “Celebration” board. This means that the machine was most likely assembled by Kottke or Steve Jobs.

Inspired by a true story, Will Smith’s new movie Emancipation is now available to watch on Apple TV+. The movie tells the story of a man who fights through unthinkable terrors in an attempt to reunite with his family. The movie debuted in theaters on December 2, but Apple TV+ subscribers can now stream it...
Usman Qureshi
29 mins ago

While speaking to The Verge, CEO of Epic Games Tim Sweeney has said that Apple’s ability to reject apps like Twitter is something “every politician should fear,” no matter what side of the aisle they’re on. “I think it’s incredibly dangerous to allow the world’s most powerful corporation to decide who is allowed to say...
Usman Qureshi
41 mins ago