You have to be super, super special to knowingly use a replica handgun iPhone case in public, as one man found out in Manitoba. 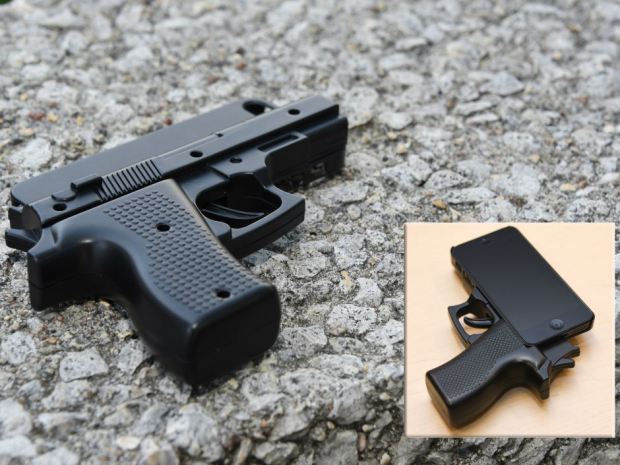 The public called the Selkirk RCMP about a man with a gun in his shorts walking around Grand Beach, on the eastern shore of Lake Winnipeg. The authorities took no chances and quickly stormed the beach armed with rifles and tasers.

Turns out, the 34-year old man’s weapon was actually a replica handgun iPhone case. The man voluntarily handed the case over to RCMP to be destroyed and was not charged.

CBC Radio producer Laura Glowacki happened to be at Grand Beach when the RCMP officers rushed to the scene, recalling “There were about, I would say, four or five police officers and then conservation officers with them — all in flak jackets, like bulletproof vests, carrying weapons.” The man was seen cooperating with RCMP and “maybe looked a bit embarrassed,” explains Glowacki.

The Manitoba RCMP are warning the public to avoid using this case. Sgt. Bert Paquet told CBC News “The call we get is that a man is in possession of a handgun on a crowded beach,” along with “We have to respond accordingly, putting potentially a lot of people at risk.” Paquet said “Our officers have to assume that this is a real handgun.” He said people with this case should destroy it with a hammer to prevent someone else from using it.

The controversial gun case has been pulled from multiple online retailers but is still available from some online auction retailers, priced around $7 and made to fit various iPhone models. You have to be as bright as a door knob if you think police won’t take this replica gun case seriously.