While the iPhone 6 and 6 Plus were available on September 19, the full impact of the new handset sales was not felt until October, according to the latest information revealed by market research firm Fiksu (via MacRumors).

As the Fiksu Competitive Index for October reveals , the hardware and software launch visibly affected app downloads: The volume of the top 200 ranked iOS apps jumped 42% that month to 7.8 million daily downloads, compared to September, when the iPhone 6 and 6 Plus were available for only 11 days. It is also worth noting that this record-high jump represents a 39% rise in daily downloads compared to last year. 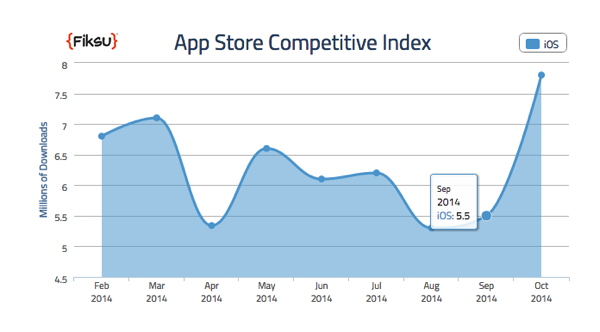 The market research company also noticed a substantial 21% jump to $1.46 in iOS Cost Per Install (CPI) compared to a month previously, and up 59% compared to the same period a ago. As for the Cost Per Loyal User Index (CPLU), Fiksu noticed a slight decline last month to $2.16, down from $2.25 recorded in September, when app downloads reached 5.5 million per day. The reason: The first set iOS apps users download are the ones they cannot live without.