Great news for the iPhone community!
Earlier today MuscleNerd annouced the realese of redsn0w 0.9Beta3. As you may know, redsn0w is a cross-platform jailbreaking, unlocking, and customizing tool for iPhones and iPod Touch which now supports FW3.1.2. (Keep in mind that this release is still BETA and you may come across some bugs)

UPDATE: Need help on how to? Check out RoryPiper guide here: Jailbreaking and Installing a Custom Boot Logo, with redsnow 0.9 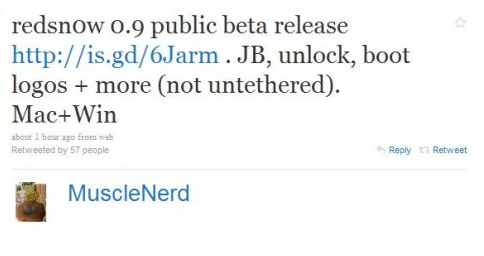 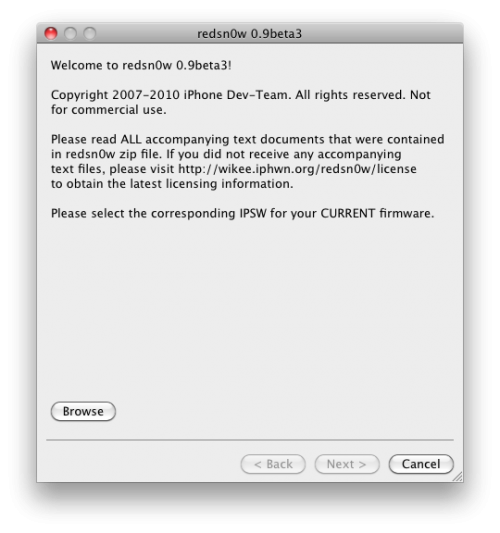 A cross-platform jailbreaking, unlocking, and customizing tool for iPhones and iPod touches. Customizations include boot logos, recovery logos, and â€œverboseâ€ boot. It’s a standalone program that doesn’t use iTunes (no custom IPSWs are involved).

The download links are at the bottom of this page (but please read the whole page anyway!).

We’ve been offering redsn0w in various incarnations over the years (including poorlad’s Windows version of QuickPwn). The most recent release before this one was redsn0w 0.8, which targeted Apple firmware 3.0/3.0.1.

What devices, platforms, and FW versions are supported?

If you need a carrier unlock, redsn0w will handle iPhone 2G by itself (by installing our BootNeuter utility). For the 3G and 3GS, use Cydia after you’re jailbroken to install ultrasn0w (baseband 04.26, preferred) or blacksn0w (baseband 05.11).

How is it different from PwnageTool?

redsn0w works by modifying your current filesystem, so your existing baseband, data and applications should remain intact.

How is it different from blackra1n?

It differs from blackra1n because:

It uses our original Pwnage bootrom exploit for iPhone 2G, iPhone 3G, and iPod 1G. (Because it’s a bootrom exploit, it can’t be fixed by Apple without a new hardware release.) Note that redsn0w 0.9 does use the USB exploit for iPhone 3GS and iPod 2G running 3.1.2, but that exploit will be fixed in Apple’s next FW release.
It offers custom logos and verbose boot
It installs Cydia without needing a separate download
It’s not as fast 🙂 (but redsn0w handles more variations :))
What if I have a late-model device?

If you have a late-model iPhone 3GS, or if you have an iPod touch 2G whose serial number begins with â€œMCâ€, you can use redsn0w to jailbreak but you are currently restricted to â€œtetheredâ€ rebooting. That means you need to connect your device to a computer to complete the boot after a reset. Also, these devices cannot have custom logos.

redsn0w will ask you whether or not you fit in this category when used with the iPhone 3GS or iPod touch 2G. If you have a late-model device and don’t give redsn0w the correct answer, you will likely need to do a system restore to recover from the mistake.

To do a tethered boot after your late-model device resets for some reason, either run redsn0w again and select â€œJust boot tethered right nowâ€, or run blackra1n.

What if I’m already jailbroken?

If you’re already jailbroken (by whatever means), redsn0w can still be used to change your boot logos, revert back to the stock logos, or switch verbose booting on and off. By selecting â€œAlready Pwnedâ€ you can bypass the steps normally needed to enter the jailbroken state.

How long should it take

You should see a picture of a drive (â€œDownloading Jailbreak Dataâ€) within 30 seconds of launching the jailbreak (after you’ve made your custom selections). It should then reboot and you should see a running pwnapple while the process is underway. It should finish within a minute or two after that, and will reboot on its own.

The Windows version has been tested by small groups of volunteers on IRC and our blog since mid-January. That being said, this is still a beta and if things go wrong you may have to do a system restoreâ€¦so make sure your data and pictures are synced before trying the beta.

redsn0w is in beta until we get iPod Touch 3G, PPC OSX, and Linux support added. In the meantime, please send any feedback to MuscleNerd (either gmail or iphone-dev.org), or tweet with a #redsn0w tag. Please detail your device, OS, and any problem you find.

More information can be read HERE

If you have tried redsn0w 0.9beta3, share your comments and how it worked out for you!