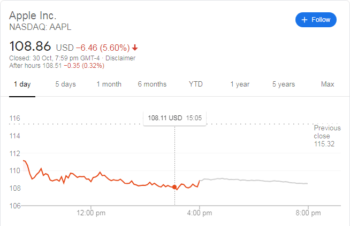 A record-breaking earnings report filed by Apple on Friday included more than just the tech giant’s financial standings. Apple warned shareholders that financial results could suffer if the commission charged on sales made via the App Store is decreased or eliminated, reports Bloomberg.

Apple is currently facing growing scrutiny from third-party app developers and the government over its App Store practices, including (but not limited to) the commission of up to 30% it charges on sales made through its platform.

During the Fiscal Year 2020, Apple’s Services segment, which includes commission from sales made through the App Store, generated $53.8 billion USD in revenue, up from $46.3 billion USD last year.

“If the rate of the commission that the company retains on such sales is reduced, or if it is otherwise narrowed in scope or eliminated, the company’s financial condition and operating results could be materially adversely affected,” states the Form 10-K report filed by Apple with the Securities and Exchange Commission.

While Apple has not indicated a reduction or removal of its App Store commission as being part of its agenda, this warning may be a move to rally shareholders as the company battles growing outrage and legal action over its App Store cut and practices.