Refurbished 8GB iPod touch (4th Gen) Back in Stock for $129 on Apple.ca

If you’re looking for a last minute Christmas gift, you might want to consider a refurbished 4th generation iPod touch as Apple.ca has restocked both white and black 8GB models for $129. These models regularly retail for $199 so at $129 (35% off) it’s a pretty good price if you require a relatively inexpensive Retina display equipped  iOS device as a music player or portable computer for the kids. 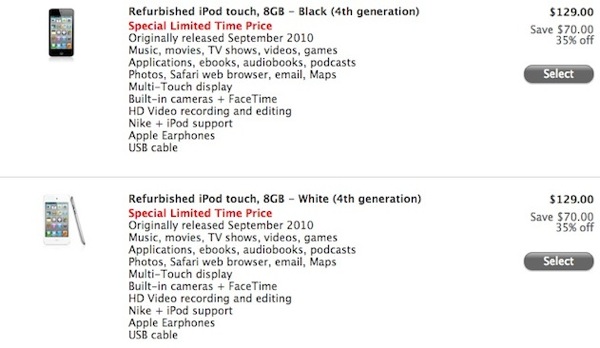 Not familiar with Apple’s refurbished products? According to Apple:

We test and certify all Apple refurbished products and include a 1-year warranty.
All refurbished iPod models also include a brand new battery and outer shell.
Limited supplies, but updated frequently. Availability is guaranteed once we receive your full payment.

You get a 1 year warranty, free shipping and a new battery and outer shell. Sounds like a good deal to me. Let us know if you’re going to impulsively buy this. Stocks go quickly!

An Apple employee is facing possible termination after posting a TikTok video that has since gone viral. Paris Campbell, who has worked at Apple for six years, posted a TikTok offering some advice to another user who lost their iPhone at Coachella. Campell now allegedly faces termination for identifying herself as an Apple employee, discussing...
Steve Vegvari
32 mins ago