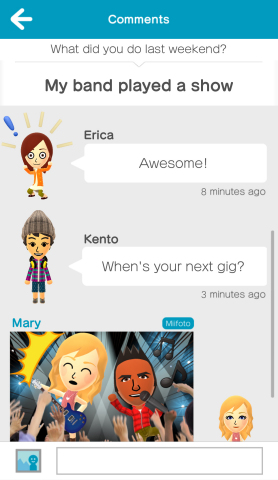 Miitomo, Nintendo’s first-ever app for smart devices, is set to launch next month but the company has already opened preregistrations for the app, allowing enthusiasts to sign up and reserve their usernames as well as receive a notification when the app is available for download. Anyone who preregisters for Miitomo by signing up for the new Nintendo Account service, will also receive early sign up Platinum Points for the new My Nintendo rewards program, which will launch simultaneously with Miitomo.

Miitomo is a free-to-start social experience that lets you spark conversations with your friends in a whole new way and uses Nintendo’s Mii characters, which first debuted with the launch of Wii Sports in 2006.

“Miitomo makes it easy for people to express themselves and interact with their friends in new and fun ways,” said Scott Moffitt, Nintendo of America’s Executive Vice President of Sales & Marketing. “Preregistering now is the best way to be among the first to get in on the fun when Miitomo launches next month.”

Currently, there are over 200 million Mii characters across Nintendo systems worldwide. Using the new app, users will be able to quickly create a Mii character and fully customize its facial features, eyes, hair, as well as voice and personality. Users can also use the camera of their smartphone or tablet to snap a photo that will be translated into Mii form, or they can simply import their Mii from the Wii U or Nintendo 3DS systems using a QR Code.

Launching alongside Miitomo in March, My Nintendo aims to become much more than a traditional rewards program. Miitomo users with a Nintendo Account will be able to take advantage of My Nintendo to enhance their experience.