It’s been a few days since Google quietly discontinued the iPhone-Optimized version of iGoogle,  and it seems that this feature has gone with a whimper, instead of bang. It was a year ago that the iGoogle for iPhone site was launched, now Google’s regular iGoogle Mobile homepage loads instead.

Many websites offer iPhone specific mobile sites, we even counted Google among our Favorite iPhone Sites of 2007, along with Google Reader and Gmail, although iGoogle’s iPhone site wasn’t launched at the time of that being written, at least we still have the others. 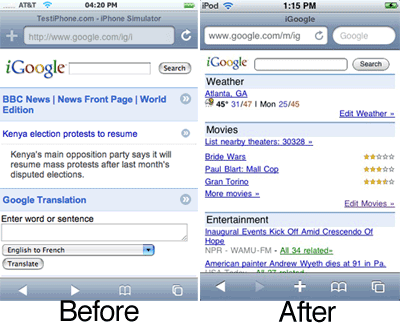 I personally hadn’t ever used the iGoogle homepage on my iPhone, so won’t be missing it terribly, and I hope this means that Google plans on focussing more on it’s iPhone Apps and integration with the iPhone because it’s one of the most powerful features of the device. Let us know your thoughts or opinions about Google dropping this function!