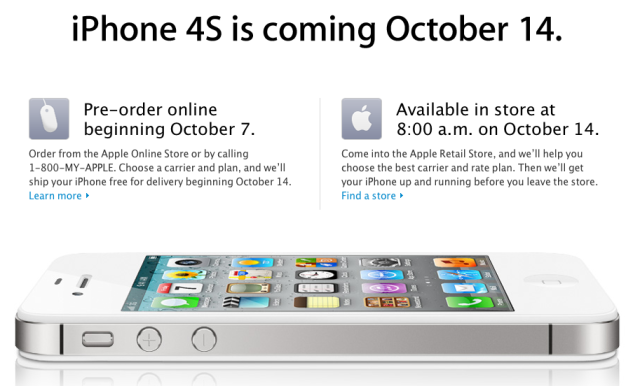 Just a reminder that iPhone 4S pre-orders start tonight from Apple.ca at 12:01AM PDT (3AM EDT), one minute into the early morning of Friday, October 7th.

Prices for the iPhone 4S start at $649 on Apple.ca, presumably for the 16GB unlocked unit (Apple.ca doesn’t advertise that price as unlocked, but we expect it to be). Expect further pricing to be revealed as the clock strikes midnight.

I would suggest you login to your Apple ID in advance to prepare yourself for the onslaught. The iPhone 4S makes its debut in stores on October 14th, and orders should ship by then.

iPhone 4S pre-order times have also been released by Telus (starts at 12AM PDT/3AM EDT), Rogers, and Fido (both at 3AM PDT/6AM EDT).