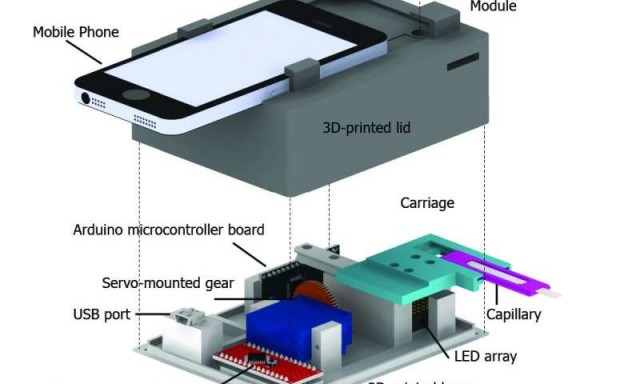 We’ve already seen the iPhone transformed into a low-cost version of expensive medical equipment, allowing medical professionals to perform HIV tests, skin cancer detection and other tests in an instant. The latest addition to this list of “wonders” is the iPhone being used as blood parasite detector (via Engadget).

Dubbed as CellScope Loa, the mobile detector is essentially an iPhone atop a printed 3D box, taking five-second videos of blood samples. The invention comes from a team at UC Berkeley, who have joined forces with Dr. Thomas Nutman from the National Institute of Allergy and Infectious Diseases, along with some collaborators from Cameroon and France, to develop the device.

A pilot study was conducted in Cameroon, where healthcare professionals are routinely dealing with parasitic worms, and diseases such as river blindness and lymphatic filariasis.

The study resulted in a new mobile microscope: researchers paired the iPhone with a 3D-printed box, which contains the blood sample. The base includes LED lights, microcontrollers, gears, circuitry and a USB port.

The iPhone captures five-second videos and a specially developed algorithm (app) analysing the telltale “wriggling” motion of the worms in the video. The whole process takes about three minutes. The result: the professional is able to determine on-site whether it is safe to administer the drug or not.

Following the success of the pilot program, the CellScope project is expanding to provide assistance to about 40,000 more people in Cameroon.

Eero, an Amazon company, has just announced a new range of WiFi solutions, including eero PoE 6 and eero PoE Gateway Power-over-Ethernet (PoE) devices, for setting up faster, reliable WiFi networks at homes and businesses. The eero PoE 6 is a dual-band Wi-Fi 6 PoE access point that provides up to 2,000 square feet of coverage...
Usman Qureshi
1 min ago

Amazon today announced at its special event an update to its best-sounding Echo speaker, the Echo Studio. This speaker is now available in Glacier White, joining Charcoal, while it also gets some enhanced audio technology updates, that will be available for all existing and new users. New custom spatial audio processing technology and frequency range […]
Gary Ng
10 mins ago

Apple's new Crash Detection feature, available on iPhone 14 and the company's latest Apple Watch models, is designed to automatically contact emergency services in the event of a severe car crash.  However, it can sometimes mistake a rollercoaster ride for a car crash (via Reddit). One Reddit user found this out the hard way when...
Nehal Malik
27 mins ago