Revealed: Pics of Google Latitude for the iPhone

When Google first revealed Latitude for mobile users, iPhone users were left out in the cold. I found this very odd at the time since many Google’ers love their iPhones. Well, it turns out that the delay for releasing Google Latitude for the iPhone was that Google was waiting for iPhone OS 3.0 to be released, as noted in the Google I/O keynote.

Google Latitude Will Not Be a Native App, But Run By Safari

We were first told that Latitude would be coming through an update to the Google Mobile iPhone app. Well, we now know that is no longer true. Google will be using Safari on the iPhone to run Latitude. Using HTML 5, as shown in the current iPhone-optimized Gmail interface.

But what’s the point of having Latitude run through Safari if the iPhone won’t have the ability to run background apps? I guess users will have to launch Latitude which will then update your location in real time. By not having a native app running in the background that will free up memory and save battery life.

Google Latitude will allow you to keep tabs on your friends, family, and other miscellaneous loved ones. I’ve seen the interface through the Latitude widget on my iGoogle page and it’s pretty neat to know where people are, in a big brother type of way. Bring on 3.0 already, Apple!

Here are some pics of Google Latitude for the iPhone: 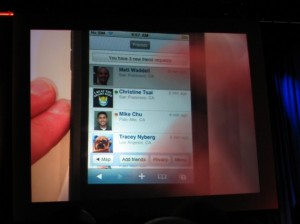 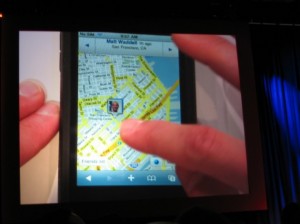 Anyone else out there looking forward to playing around with Google Latitude for the iPhone?