I think I’m a little late finding the Backgrounder app for jailbroken iPhones, but when I found out about it recently I was really excited to try it out. I use Google Talk to chat with my buddy who has a BlackBerry and it drives me crazy that it runs in the background for him. He gets nice little notifications and I’m stuck making sure my iPhone doesn’t go to sleep so I don’t get logged out while I’m waiting for him to write back. 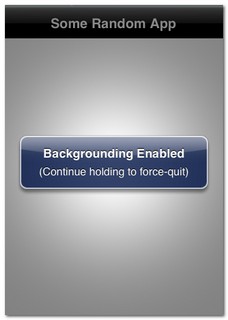 Once I installed Backgrounder via Cydia I of course tested it by chatting with my buddy using Google Talk. I launched Google Talk, held the “Home” button until it was running in the background and then started surfing the web, sending text messages, and sending emails. Google Talk played a sound and vibrated to let me know a message was waiting for me. It works great, my only pet peeve is if you let your iPhone go to sleep you will lose your wifi connection and you won’t get the notification that you have a message. As soon as you wake your iPhone and it reconnects to wifi, you will get the notification that you have a message. This isn’t ideal but it’s better than the alternative, not using Backgrounder and being completely logged out when your iPhone goes to sleep.

Where I found the Backgrounder app came in extremely useful was for using your favorite Internet radio app. I use the Corus radio app constantly at work, at home, even when I’m walking my dog, and I hate it when I try to reply to an incoming text message and the Corus radio app shuts down. Now I can launch Corus, enable it to run in the background and feel free to reply to a text messages or do whatever I want while my music keeps playing.

Until push notifications come with iPhone OS 3.0, Backgrounder is going to become a very useful app for me!!