With the many iPhone battery solutions out on the market, there is virtually one for everyone’s individual needs.  If you want something that will provide you with many more hours of talk talk and/or internet time, there’s something for you.  If you want something that is a little more portable but might not have all the extra juice of some other battery solutions, there’s something for you.   Then of course there are the ones that might not be the most functional and portable, but simply look great!

Probably the most popular iPhone battery solution so far has been the Mophie Juice Pack.  The latest contender comes from Phonesuit and is very similar, but at the same time also has some features which helps it stand out in a crowd. 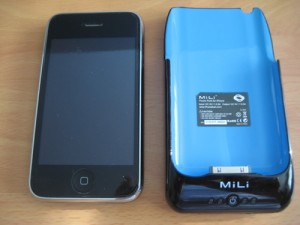 The Power Pack comes in six different colour combinations, with different colours for the inside and also the outside shell.  The unit I was able to review was the black with the blue interior.  Personally I think it is the best colour to choose if you have a black iPhone.  The finish is very smooth and very shiny, similar to the back of the iPhone itself.  At first glance I thought that since it was so smooth, it would scratch pretty easily.  So far I haven’t had any scratches appear.  What I don’t like about the finish, just like the iPhone, is that it is almost too smooth.  There have been several instances where I have almost dropped the phone with the Power Pack attached because it slipped in my hand.  Like I said, the finish is very similar to the phone itself, so if you have no problems with a naked iPhone, you won’t have a problem with the Power Pack.  The other problem with it, like with other similar battery packs, is that it will not fit with an invisibleSHIELD backing installed, I had to remove mine. 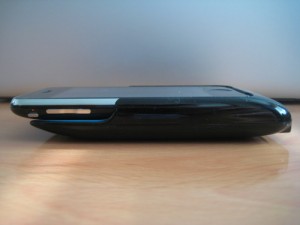 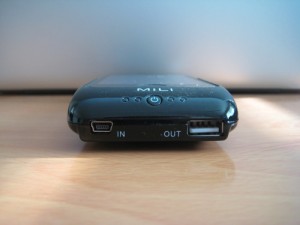 The Power Pack is rated at 2000mAh, and claims to provide up to 390 hours of additional standby time, 6.5 hours of 3G talk time, 6.5 hours of 3G internet use, 31 hours of audio play and up to 9 hours of video play.  All impressive numbers.  The unit comes with 4 lights on the front to indicate the remaining power left.  During my tests, I have been able to use it for up to 3 hours of almost continous 3G internet use (a long wait for a ferry and the ferry ride), and I still had more than half the power left.  With this in your pocket, I think it would be hard for you to run out of battery power in a single day.  And I found it fits in my pocket quite easily, the added bulk was not that noticeable.

What’s unique about the MiLi Power Pack is that it also has a USB port on the bottom, allowing you to charge other USB devices, such as bluetooth headsets, or even another iPhone.  That also allows you to sync while charging, so you don’t need to remove your phone in order to sync – very handy!

Overall it is a great battery solution, with a few minor flaws. One being too smooth/slippery. Also the fact that it doesn’t cover your whole phone, leaving it a little vulnerable, especially towards the top part of the phone.  But at a price of $79.99, it is also $20 cheaper than the Mophie Juice Pack, which doesn’t have the USB port.  If I had the choice of either the Mophie or the MiLi, I would go for the MiLi.  Head over to Phonesuit and purchase one today!

If you liked my post, check out my new blog – www.joegetsfit.ca