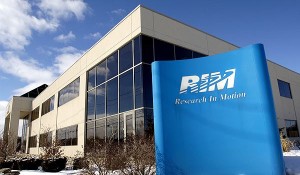 Canada’s tech darling, Research in Motion (RIM) has started to fire off its senior level staff, according to a source close to the matter, reports the Globe and Mail:

“Lots of high level people within RIM were let go today,” this person said. “Quite a few. Big shake up.”

An example would be co-CEO Jim Balsillie, as RIM has announced he has left the company’s board of directors, as noted in RIM’s fourth quarter earnings press release. Balsillie and co-CEO Mike Lazaradis stepped down as CEOs back in late January. David Yach, RIM’s CTO has also ‘retired’ from the company and Jim Rowan, RIM’s COO has decided to pursue other interests.

“As I complete my retirement from RIM, I’m grateful for this remarkable experience and for the opportunity to have worked with outstanding professionals who helped turn a Canadian idea into a global success,” said Jim Balsillie.

New CEO, Thorsten Heins, had this to say about RIM’s future:

“…we are undertaking a comprehensive review of strategic opportunities including partnerships and joint ventures, licensing, and other ways to leverage RIM’s assets and maximize value for our stakeholders…it is very clear to me that substantial change is what RIM needs…we believe BlackBerry cannot succeed if we try to be everybody’s darling and all things to all people.”

It’s sad news, but we all saw this was coming. RIM failed to innovate and believed in their minds the BlackBerry would be able to weather the storm from the iPhone and Android. This was a critical lapse in judgement from their senior leadership, and the market has spoken.

First, let me discuss iPhone. We sold 14.1 million iPhones in the quarter, which represents a 91 percent unit growth over the year-ago quarter, and was well ahead of IDC’s latest published estimate of 64 percent growth for the global smartphone market in the September quarter. And it handily beats RIM’s 12.1 million BlackBerrys sold, in their most recent quarter ending in August. We’ve now passed RIM. And I don’t see them catching up to us in the foreseeable future.

They must look beyond their area of strength and comfort, into the unfamiliar territory of trying to become a software platform company. I think it’s going to be a challenge for them, to create a competitive platform, and to convince developers to create apps for yet a third software platform after iOS and Android. With 300,000 apps on Apple’s App Store, RIM has a high mountain ahead of them to climb.

Jobs nailed it back then, but RIM of course didn’t believe it. Here’s hoping the next line of BlackBerrys can help the company recover.