Ring, maker of some of the best video doorbells for one’s smart home, has today announced that it is rolling out end-to-end encryption to eligible devices worldwide, after previewing the tech in the U.S. over the last few months. 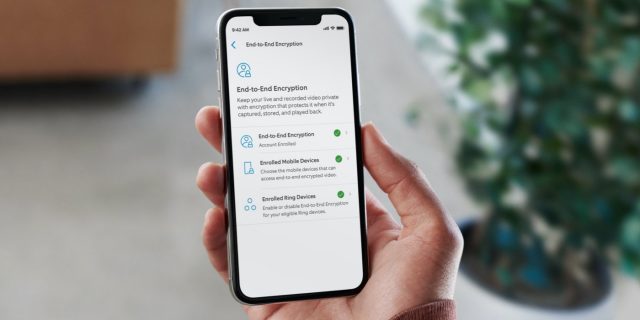 Ring announced today that it will begin expanding and adding security measures to its video devices and apps, including end-to-end video encryption, support for authenticator apps and CAPTCHA security for the Ring and Neighbors apps.

These measures are the latest in a push by the Amazon-owned home security company to improve its own security following a widely publicized exposure of Ring user data in 2019. Last year, the company introduced a security dashboard to the Ring app, along with mandatory two-factor authentication. In early 2021, it began to rollout a “technical preview” of its end-to-end video encryption feature, which was available only on a select few Ring devices.

Beginning today, many of Ring’s major video devices will become compatible with end-to-end video encryption, which stops third parties, including Ring’s cloud service, from accessing or tampering with videos in transit between devices (e.g., between video doorbell and phone).

If users opt for E2EE, some features will be disabled. They’ll be accessible again if E2EE is switched off, although they may need to be manually reset.

Shared users will no longer be able to view clips, videos and links can’t be shared, and the Live View won’t be accessible from multiple devices at the same time. Third-party devices won’t have access any longer, so users won’t be able to watch Ring videos on an Amazon Echo Show, Fire TV or a Fire Tablet. Additionally, features including Motion Verification, People Only Mode, Snapshot Camera, Bird’s Eye View, Pre Roll, Event Timeline and Rich Event Notifications will be disabled.

To see the full list of features that’ll be affected, visit the Ring website. Ring does have plans to make some of these features usable with E2EE in the future, but there’s no timeline yet for when that might be.