**Pre-order your iPhone 3G invisibleSHIELD and get 20% off your order! Limited time offer, order today!**

The moment the iPhone 3G was announced, the first thing that came to mind was “what is Rogers going to charge us?” Well, they answered that question by announcing that the iPhone 3G will cost $199/299 (8GB/16GB) with a mandatory 3 year contract. Some people are shouting “Yahoooo!!!” for the $199 subsidized price, but on the opposite end of the spectrum, others are screaming “NOOOOOOOO!!!!!!!!!!!” If we’re signing on for 3 years…just how much will other countries be shelling out once July 11th rolls around?

Canada: Rogers/Fido will be offering the 8GB/16GB iPhone 3G models for $199/299 on a 3 year contract. As for monthy plans, it has been speculated that there will be a $30 unlimited monthly plan. My guess: Don’t count on it! Until Rogers announces something, we’ll be kept in the dark most likely till July 11th.

Italy: Vodafone Italia recently announced iPhone 3G pricing on their website. The interesting thing here is users will be able to purchase unsubsidized iPhones via pre-paid options. Users can expect to pay €499/ €569 ($787/897CDN!) for 8GB/16GB iPhones on the non-contract price. Now that’s what you call a hefty mark up. Carriers are making you pay the price to get an iPhone contract free!

UK: God save the Queen!…err…whoops. Anyways, it looks like people in the UK are in for a real treat, because by signing onto certain monthly plans with O2, iPhones can be FREE! For example, if you signed a 1.5 year contract paying £45/month ($90CDN), the 8GB iPhone 3G is free like unlimited food samples from Costco. 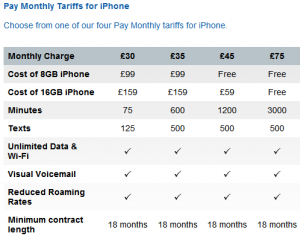 There examples show us one thing that we can learn here: owning a brand new iPhone 3G is not going to come cheap! Carriers will either be able to rob you senseless via a subsidized iPhone 3G price on a long term contract, or offer the phone for cheap with an expensive monthly plan. So the choice is yours!

PS – iPhoneinCanada.ca was mentioned in a CBC.ca article! Click here to read the article. Also, you might have noticed the new header image on our site! Props to iPhoneinCanada.ca Forum member TheDoc for designing it for the community. Thanks TheDoc! 🙂