Rogers Memo Reveals It Will Carry the iPhone 5 and ‘iPhone Lite’?

With Apple’s ‘Let’s Talk iPhone’ media event set to launch in an hour or so, we have received a tip that mentions Rogers will carry the iPhone 5, and also the ‘iPhone Lite’.

The leaked internal document states Apple has confirmed its newest device ‘as iPhone 5’ to Rogers, with no other details such as pricing or launch date. Also confirmed in the document is the release of iOS 5, iCloud, and the ‘iPhone Lite’, which could be reference to the rumoured cheaper iPhone 4.

We last mentioned Rogers employees had undergone pre-launch iPhone training, with our source mentioning the next device was referred to as the iPhone 5. This most likely refers to the next-generation of the iPhone, but not necessarily the final name of the phone.

You can take a look at this document below: 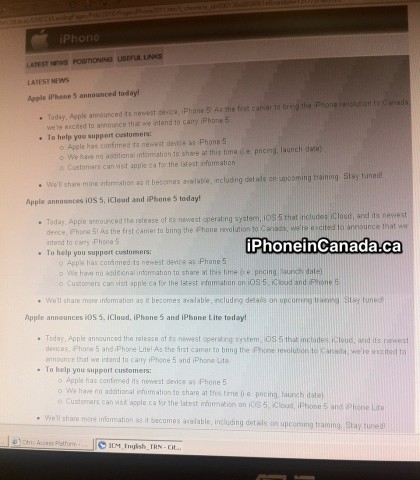 Rogers recently reduced the price of the iPhone 4 to $99 on a three year term, the last of the ‘Big 3’ carriers to do so.

Thanks for the email, tipster!