Well, you heard it here first! On September 18, we reported that Rogers may be reverting back to its previous hardware upgrade policy beginning October 2009 and BAM, dead on!

Effective October 1 2009, Rogers will be reverting its current Hardware Upgrade Policy back to what it was before the changes on August 21 2009.

Unfortunately while the change is good, it likely will not last since Rogers is doing this as part of their Q4 Promotions for the holiday shopping season. In other words, post-Q4, you can expect the policy to go back to what it was. So while I like to think that the community uproar played a part (which it probably did), this move is simply Rogers looking out for $$$$.

As a refresher, the change made to the Hardware Upgrade Program on August 21 2009 was a new policy that stated that you can only get a hardware upgrade after 24 months since last activation/upgrade. The new policy affected all consumer accounts (business accounts seem unaffected) and all devices (smartphones and consumer phones).

Previously, everyone was able to get a hardware upgrade after 12 months since last activation/upgrade and then that was amended to only include â€œdumbphonesâ€ or consumer devices; smartphone users had to wait 24 months instead of 12 months. After the August 21 2009 change, the policy did not discriminate at all and threw everyone into the 24 month tenure pile.

Now effective October 1 2009, Rogers is temporarily reverting back to the previous policy which allowed consumer devices to upgrade every 12 months since last activation/upgrade instead of 24 months. Smartphone users are still at 24 months however.

This is good news for those of you that are with Rogers and have a consumer device with a contract that is about to hit 12 months or exceed 12 months since last activation/upgrade. Those people once again qualify for an iPhone 3G/3GS because when the August 21 2009 HUP amendment went live, those users lost their upgrade opportunity.

So, consumer device/dumbphone owners, your eligibility is back to minimum tenure of 12 months since last activation/upgrade but it will not last. If you wanted to get the iPhone 3G/3GS, now is the time (or whenever your upgrade is ready).

If you are wondering why smartphone owners have to wait, here is what Rogers has to say:

“Rogers Wireless invests heavily in providing the latest data devices at affordable prices to our data customers. In addition, with the growth in popularity of data devices there has also been an improved level of quality and technology that has gone into the line-up over the past years allowing a longer hardware lifespan.”

That’s great. But I still want my new iPhone every year. 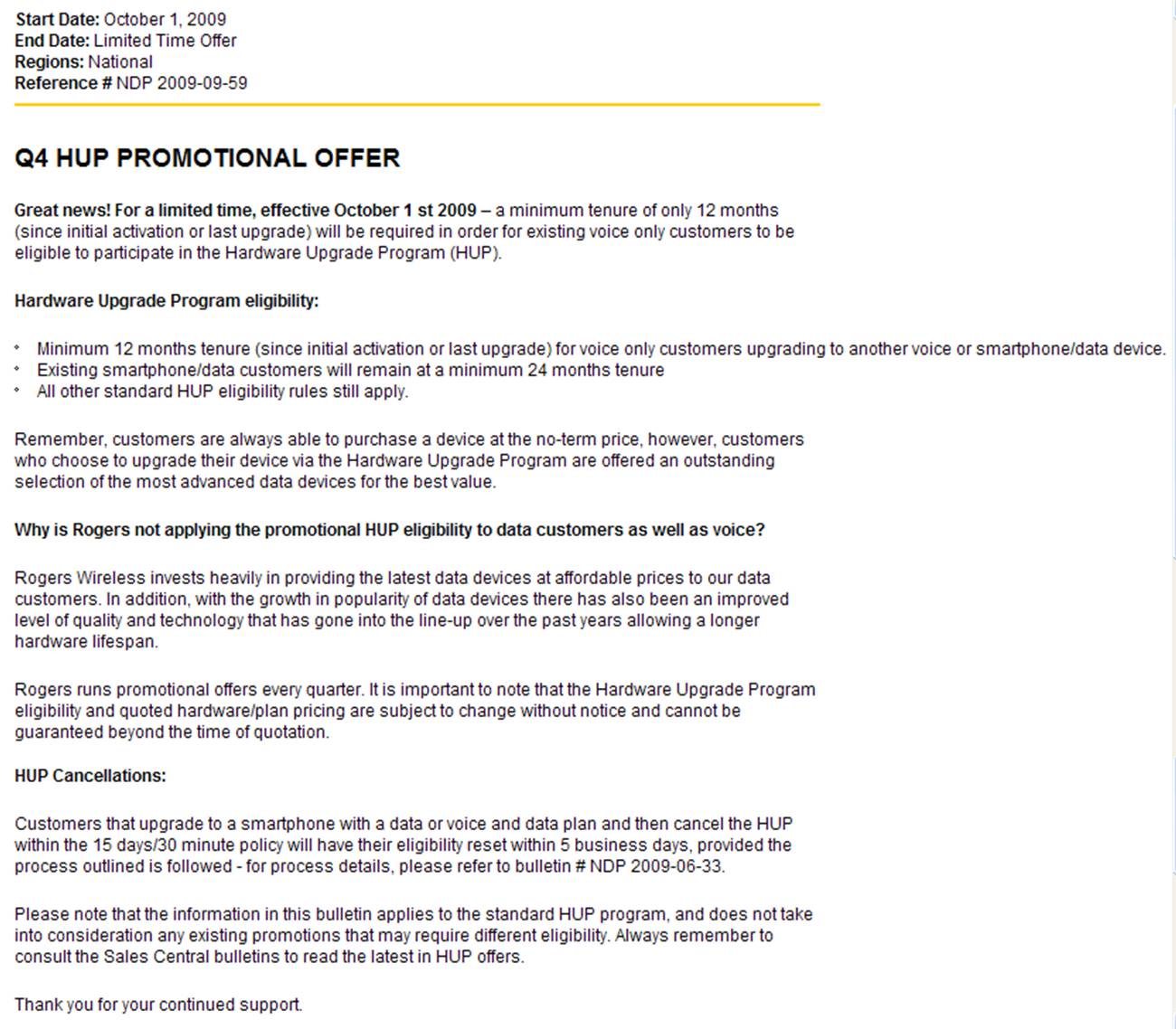