Rogers Speculates Next iPhone ‘Coming Soon’ By Sending Out SMS

if you haven’t gotten the msg, texting YES to 471-5 will get you the confirmation msg too.

The confirmation message received notes device reservations require a $40 refundable deposit, and the Rogers Reservations System will have to be accessed through your My Rogers Account. The following image is from my own test: 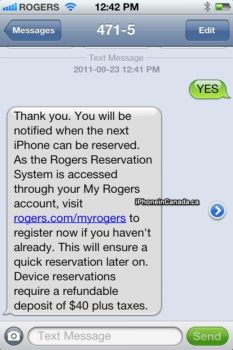 Rogers today has sent out an informative text message to customers notifying them they could be the “first in line for Canada for the next iPhone” as soon as it becomes available, via the Rogers Reservation System.

If users reply “YES” they can be notified when the iPhone can be reserved. With speculation Apple will announce iPhones on October 4th, carries appear to be ramping up for the next launch. Rogers was the first carrier in Canada to exclusively offer the iPhone 3G in 2008.

Check it out the text below, along with the reply: 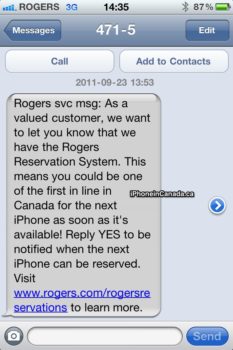 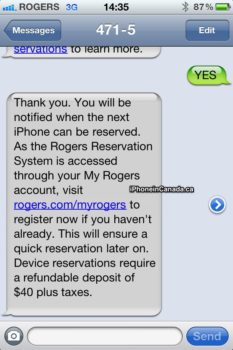 Telus is currently offering the iPhone 4 for $99 on a three year contract, with the already extended sale set to expire on October 3rd, the eve of the rumoured Apple Media Event. Have you received this text message?

Thanks to everyone for sending this in (Pierre, @KMPhotographer, Dustin)!